Sadly TEC-Drive v1 died an untimely death when it overheated due to being powered from +/-15 V instead of the designed +/-5 V. 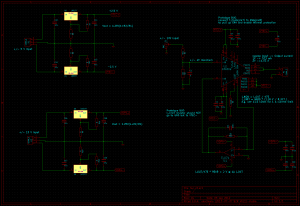 Constant-current drive is achieved using the OPA569 (U2) I_monitor output. I_monitor sources/sinks a fraction I_out/475 of the actual output current. By using another op-amp (U1) in a transimpedance configuration we get a feedback-voltage proportional to the output current. 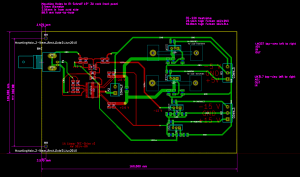 Built and assembled as a plug-in card for a 3U rack. Note big heatsinks on the +/-2.5 V regulators. 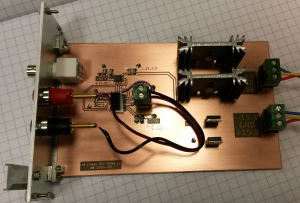 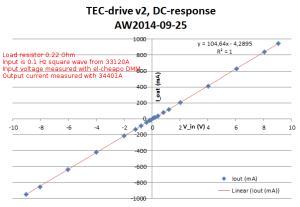 With no low-pass capacitors (C1 at the input, and C11 over the transimpedance-resistor) added and a purely resistive load the frequency response extends beyond 1 MHz with some ringing. 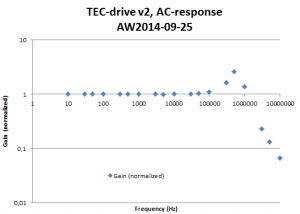 We've put together a few of these butterfly laser-diode mount + driver combos. It combines a heat-sinked butterfly mounted laser-diode with a current/temperature controller by Wavelength Electronics. The assembly is low enough to fit into a 1U (~44 mm) high 19" rack-enclosure. 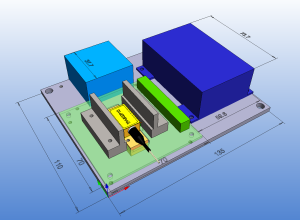 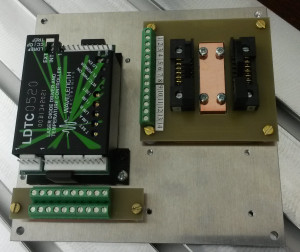 The 14-pin laser-package (yellow) is held in place by ZIF clamps/sockets 5253-100-07S (standard) and 5253-100-07R (reverse) from from Azimuth Electronics (grey in the CAD drawing, black in real life). The Wavelength Electronics LDTC driver controls both the laser current and temperature using the laser's own on-board TEC and thermistor. The base-plate has additional room for a heatsink and a fan, but so far I think nobody has used this feature. Semiconductor lasers have about 30% efficiency, so with anything under 1 W of optical output the dissipated heat should stay below 3-5 W.

The PCB has no electronics on it (see bfly_mount_v1_schematic_2013sep3), the pins from the Azimuth sockets are just routed to 150 mil pitch screw terminals. 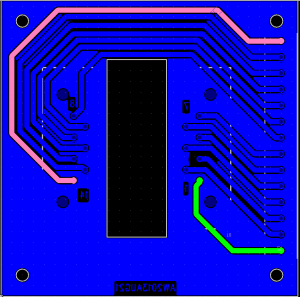 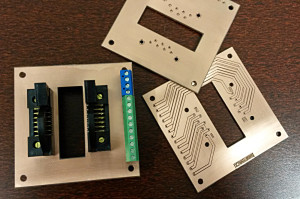 There's an additional mini-pcb for screw-terminals on the input side of the LDTC controller. screwterminal_camfiles_2013-09-12

Our in-house design won't win any prizes for design or style, but it does the job. Here are a few pictures of commercial butterfly mounts. Some combine the current/temperature driver with the mount, others just have D-sub connectors for external current/temperature controllers.

The TEC drive I have been working on is now mounted as a plug-in card in a 3U 19" rack enclosure like this: 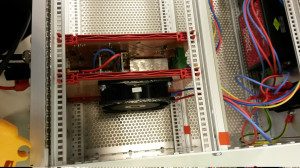 The card next to the TEC drive holds an 80 mm fan which helps cool the heatsinked linear regulators and the linear H-bridge that drives the TEC.

The back of the 19" rack enclosure holds two TRACO POWER PSUs that produce +/-5 V at max 4 A and +/-15 V at max 667 mA. An IEC power-entry module containing the IEC-connector, a fuse, and a power switch is visible far right. Far left is a small PCB for distributing +/-15 V to other cards in the same enclosure.

Added cooling allows testing the drive at the max input level of +/-10 V, which should produce (roughly) an output of +/-2 A. 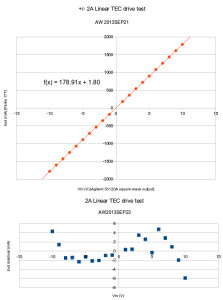 The output current follows 179 mA/V * Vin + 1.8 mA with a maximum nonlinearity of about 6 mA (0.3% of full-scale). Despite the fan-cooling the transistors still get quite hot and staying below 1 A output in continuous operation is probably a good idea. 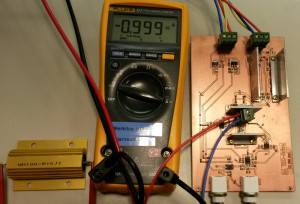 I made four heat sinks from aluminium L-profile for the linear TEC drive. Two 30 mm long for each side of the H-bridge (middle), and two 50 mm long for the voltage regulators(top right).

The regulators take 5 V input and produce 2 V, so they each dissipate 3V *ITEC Watts. The H-bridge dissipation is load-dependent, but for a low resistance load the dissipation is almost 2V*ITEC Watts. Here I am using a resistor (lower left) as a dummy load.

I tested the drive at 1 A for a few minutes, and the heat sinks do get quite warm. For continuous use at 2 A I think a fan will be required. 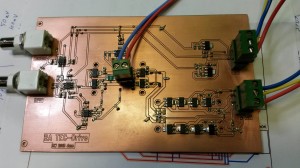 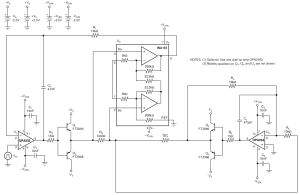 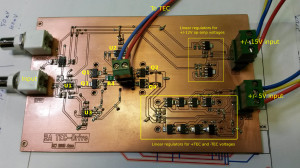 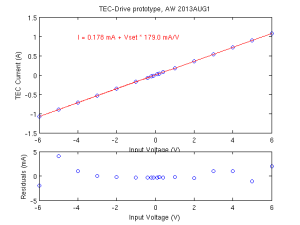 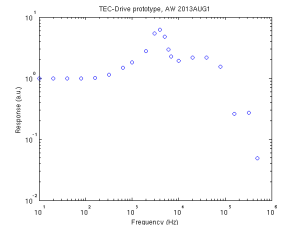 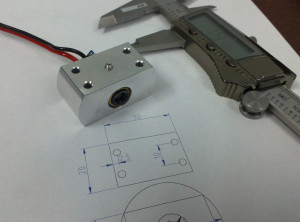 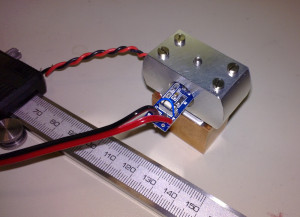