22 skippers with guests from RUS, SWE, and NED, in addition to FIN skippers came to this two-day event in Espoo. For me it was a non-event since I don't own the smaller MicroMagic rigs that were required during the first day with steady 7-8m/s and up to 11-12m/s of wind in the gusts.

At times you hear voices out there who mutter that the IOM sort of "fails" as a one-design because there isn't a minimum fin thickness, and the minimum weight is so low it is really difficult to DIY build a competitive boat on your own kitchen table. In contrast, the MicroMagic seems to do a reasonably good job of "pure one-design" with the hull and appendages, although people do play around with combinations of MkI and MkII fins and rudders.

But compared to the IOM, the MicroMagic rigs are a completely wild jungle! Although the biggest no1 (or should we call it "A"?) rig is limited to the stock size sails which come with the kit, there are little or no limitations on the smaller rigs. When there is this much freedom, people are bound to explore the design envelope, and unlike a pure one-design where everyone has the same equipment it will take some experience, time, and money to converge on rig designs for the smaller sails which are competitive. People seemed to use either no2 or no3 rigs yesterday, and I photographed some of them below. The top NED and SWE boats led the field along with FIN-111 who had obviously invested in the right kind of carbon-sticks, ball-bearing thingys, and sails. It looks like it is advantageous to get both the main and jib booms as close to the deck as possible.

All of this leads to a slight illusion then when you gladly advise the newcomer that the class is cheap and uncomplicated, "you get the kit for 170eur and you are done", when in fact the competitive people swap out fins and rudders right away, and spend 4-500 euros on a set of the latest carbon-ballbearing-super-mainsail-roach-rigs. Anyone with more experience in the MicroMagic class care to comment?

12 boats completed 6 races before lunch in light and shifting conditions. After lunch there was no more sailing because of heavy lightning, thunder, and lots of rain.

The ball-raced gooseneck with ballbearings around the mast looks nice. Riku had a new boat with aluminium mounts for the sheet and rudder servos instead of the standard plywood ones. Many boats had new "VAM" sails.

If you ask me there is a lot more Sailing in 20 minutes at the MicroMagic pool than in the rich boys pissing contest they call AC33.

With a boat that had been assembled only three days before the event I sailed in the Finnish MicroMagic nationals that were held over the weekend in Tampere. 14 skippers is ok-ish, but with 70 registered boats I had hoped for an even bigger fleet.
Results here: http://fin.micromagic.info/index_files/SM_2009.htm

I got my MicroMagic assembled and sailing three days before the big race which is in Tampere on the weekend.

The third ranking race of the year gathered 8 boats just outside Carusel in central Helsinki. 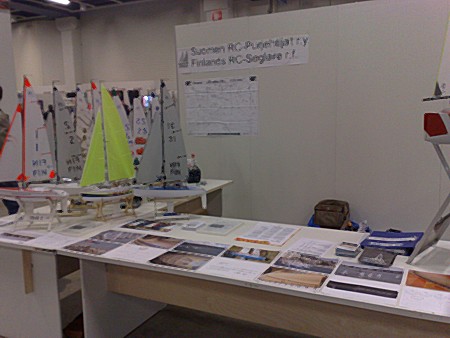 Model Expo along with cats, dogs, snakes, and Llamas at PetExpo, and everything family-ish you can imagine at Child'08 happened over this weekend at the Helsinki fair centre. Like last year (see here and here), we had the MicroMagic's sailing in the pool. This year with four less noisy fans and up to 10 boats.

The RC-pilots were only allowed to fly in a large hall with a net separating the planes from the public, but after the doors had closed the braver pilots did some flying over the pool! 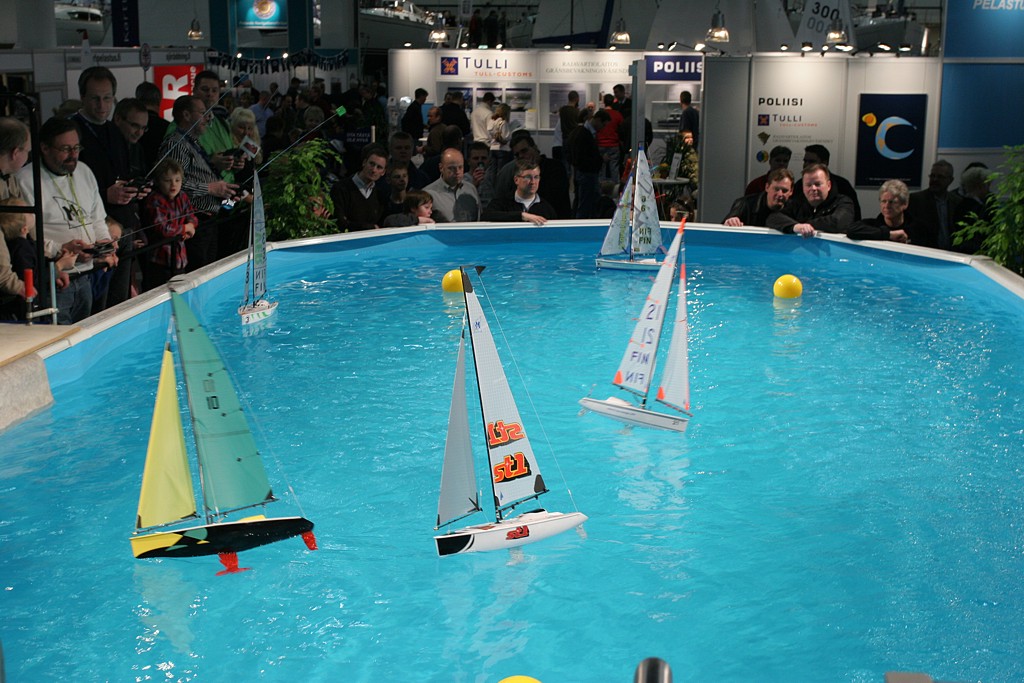 I remember a quote from MMI some years back on the IOM "there's nothing wrong with it another metre wouldn't put right!". Well the days of the A-boat and 10-Raters are pretty much gone in most countries, and now there are a number of sub-1-metre boats or kits becoming popular. Some are popular in great numbers, like the Micro Magic (see my post from Feb 2007). Here are two home-built boats/boat-types I've been notified of lately: 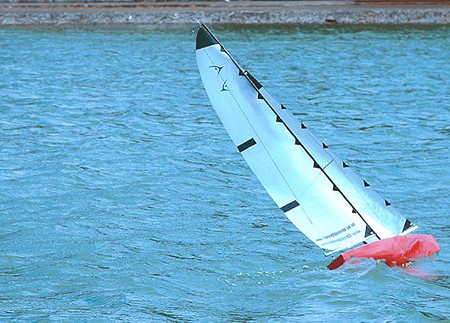 This one is 750 mm long, comes from NZL, and is called a Racing Sparrow. The website looks exceptionally good with a lot of information, pictures, and downloadable plans. Designer Bryn Heveldt has also written a book, available on Amazon, about building the boat. There's a YouTube video here. 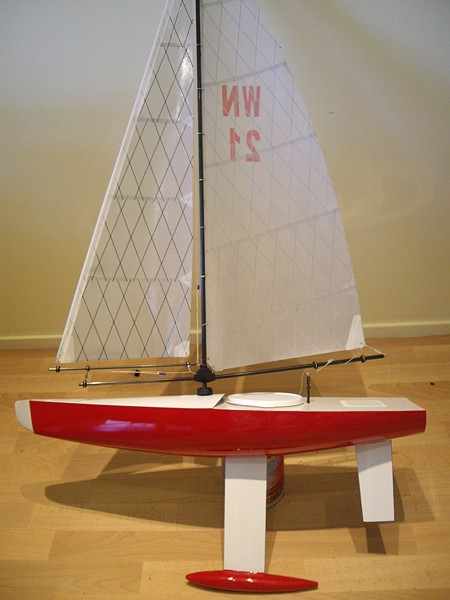 This is a Strathclyde 70 class (does the class have other 'homepages'?) boat, also around 700 mm long, planked in balsa by Peter Trimmer (AUS). It's actually a 70 % scaled down version of the Laerke IOM.

I wonder how these boats sail? I've sailed a MicroMagic a couple of times, so if anyone can comment and compare these two to a MicroMagic or an IOM I'd be interested. Do people really want the 1+ metre boats, or is racing just as fun with a smaller cheaper boat?

As before I would predict that any class that aims to be popular needs to have good availability of boats. There are a lot of MicroMagics and RC-Lasers around because you can buy them (more or less cheaply) over the counter at the hobby shop. It's just a shame that usually the designs and class rules of home-builders and accomplished radio-sailors (you know, the ones who still have their A's and 10R's in the basement) seldom meet with the needs/requirements of people who are able to mass-produce a boat. I think currently there is no commercially mass-produced kit or ready-made boat sold that fits in any international class (A, 10R, M, IOM) ? The Windstar probably comes close, but I understand it requires a lot of modifications before it's competitive with a standard IOM.

I've toyed with some ideas around IOM-production, but it's not likely that 2008 will see major progress (too much else to do...). If anyone has some news or ideas let me know! Now it looks like we will have MicroMagic sailing at both the Helsinki Boatshow (Feb 08) and the Helsinki Model Expo (Apr 08) - and I did sort of promise last year that I would turn up with a boat of my own in 2008...

Update: There's an article in the latest Model Yachting magazine about Jon Elmaleh's latest project the Twang IOM. It's going to be mass produced and will hopefully be available in the summer of 2008. No word on Jon's site yet...