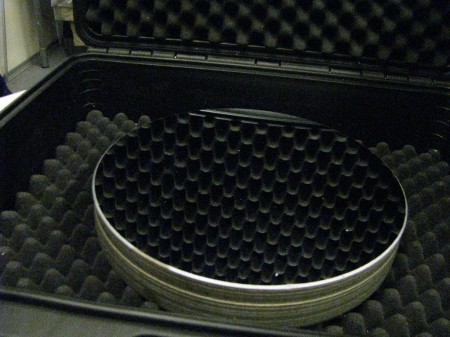 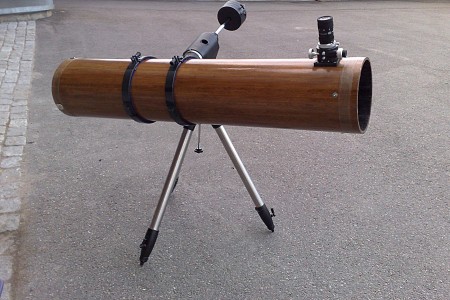 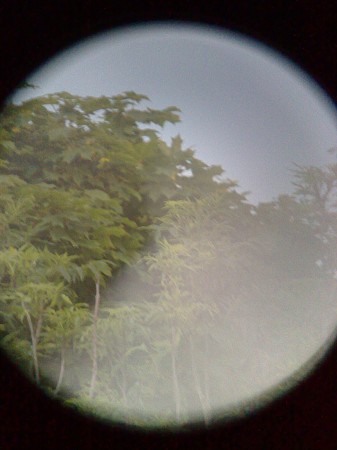 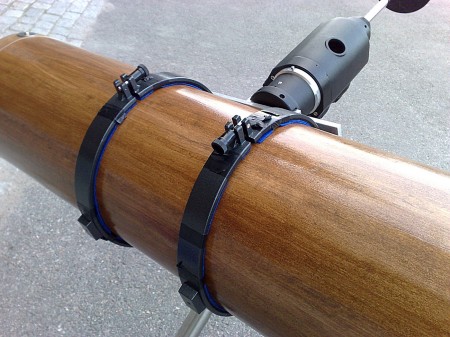 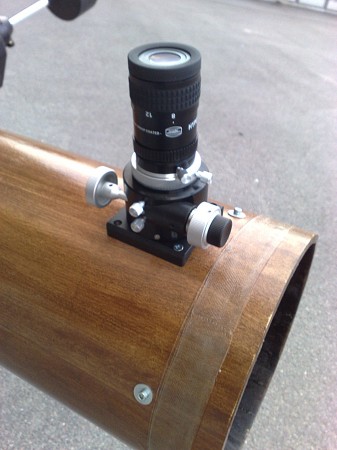 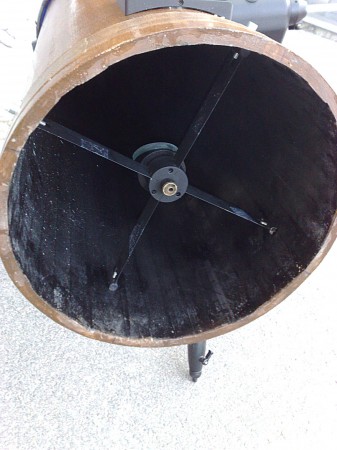 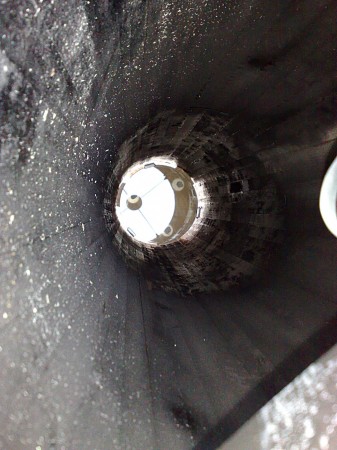 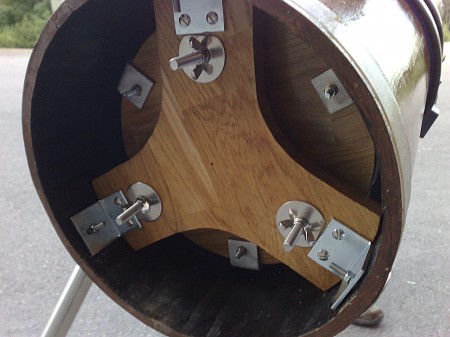 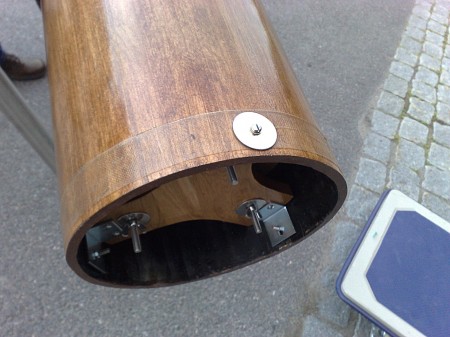 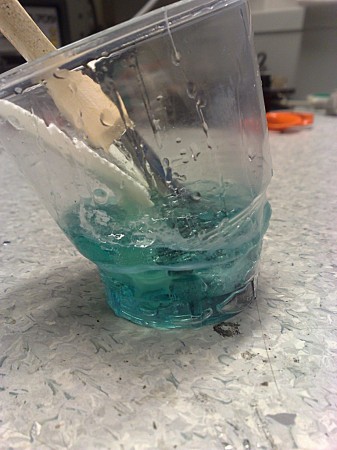 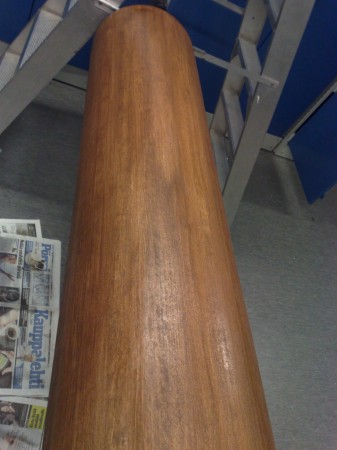 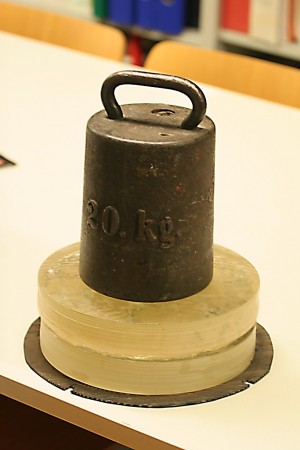 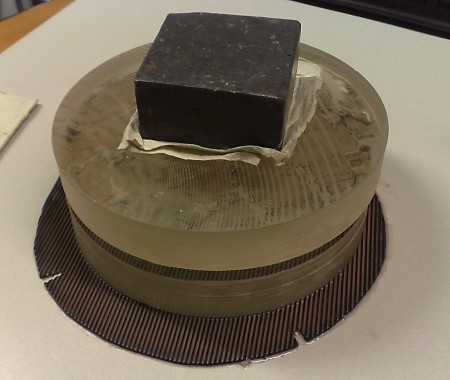 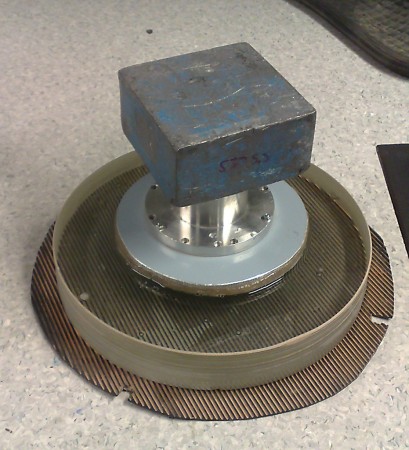 After a few (2-3) more hours of polishing with the full-size lap the mirror was fully polished. No holes or marks can be seen in the mirror surface with an upside-down 25mm eyepiece. Final polishing progressed rapidly when we used a weight (4-6 kg) on top of the mirror/tool.

The following task is called figuring, where the surface is taken from a sphere to a praboloid. Following advice from experienced mirror makers we are doing this with a smaller pitch-lap which is about 60% of the diameter of the mirror. We're using W-shaped strokes mostly in the middle of the mirror.

This picture shows the progress over a few 10 min or 20 min figuring sessions, with measurements taken after each session. 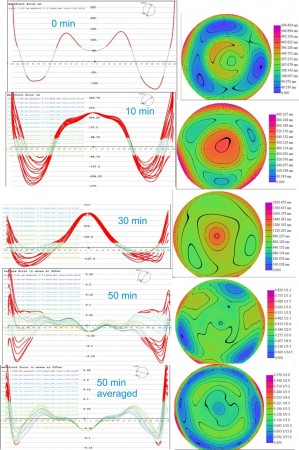 The main difference between a sphere and a praboloid is evident. The paraboloid is deeper in the middle, so the error plots above show a 'hill' at the centre which needs to be polished down. The top four measurements are single measurements and show a significant amount of distortion with three lobes at 120 degrees apart. I'm not sure where this originates yet. The final measurement at the bottom is an averaged one where we turned the mirror 90 degrees between each measurement, and shows little or no hills or valleys at 120 degrees apart. We are now at 1/17 wave rms error, which seems OK. The mirror is still too high at the very edge, along an 8mm wide strip in from the edge, which we will try to correct tomorrow.

Out pitch-lap is one that really doesn't work when polishing mirror-on-top. Should have realized that yesterday. The first two 20min sessions today were spent making the shape of the mirror worse, before we switched to tool-on-top for the last 30min + 30min. Suddenly it all goes much better, and we are back to a nice better than 1/10 wave sphere. We still see small dots from a laser-pointer reflection, so it's not time for figuring just yet. 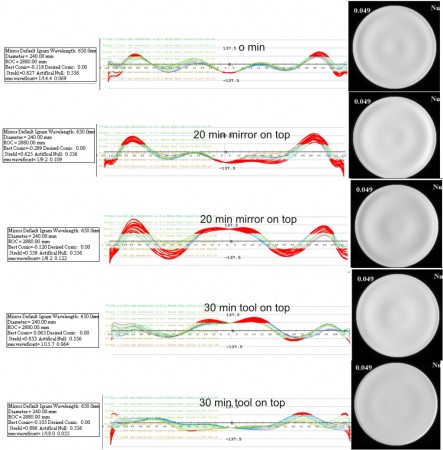 The graph shows the wavefront error in nm, compared to a sphere. The Foucault images on the left are simulated from a zernike fit to the surface measurement. 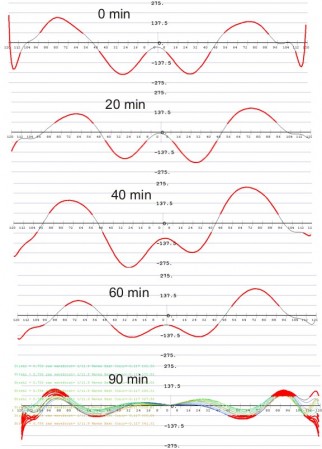 Something must have been wrong with the pitch-lap on Friday, since we began today with a strange bump in the middle of the mirror. The picture shows how the shape of the mirror (actually the wavefront, compared to a sphere) changed through today's polishing session. Slowly getting back to a good spherical shape. Hopefully the mirror will be polished out soon and we can start figuring it into a paraboloid.