Without much training and without any time goal I participated in the Jakob half-marathon.

Here's a chart with the min/km times from the half-marathons I've run.

Next year I must remember to do one or two 90-120 minute training runs per month and things will go much smoother...

My fourth half-marathon. Not quite a personal best, and my excuse is that the course is a bit up-down hilly and has a lot of turns that slows you down.

Otherwise a solid run with no major problems. A lot warmer than last year, so I ran in shorts and T-shirt. I could put in some work on the uphills which made the HR go >170 and still recover to a reasonable HR 165 or so on the downhills or the flat bits. 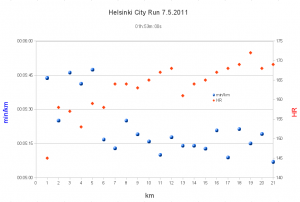 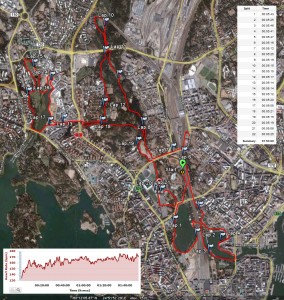 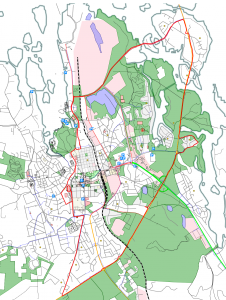 I was a bit too far back in the start, and had to criss-cross among slower starters for at least the first 3 km. A strong side/aft wind made the first few kilometers easy downwind 'sailing', and luckily the route took a more protected less windy road after the turn at 10 km. After around 13km when it was windy again, now a side/head-wind, I slipstreamed in tour-de-france-style in the wake of a group of runners to avoid the worst wind. This course is very flat and fast, and I caught up with the 2-hour pace-runners(dressed in black tuxedos!) somewhere between 19 and 20 km.

While driving home through Perniö I saw some serious long distance runners taking part in a 100 km race. These people do 20 laps on a 5 km course, some in under 8 hours...

Despite forecasts of rain during the week the weather cooperated nicely and we only got wet after 18 km or so.

At about 14 km my legs started to feel heavy, and after the last gatorade+water station at 17 km I started walking all the uphills.