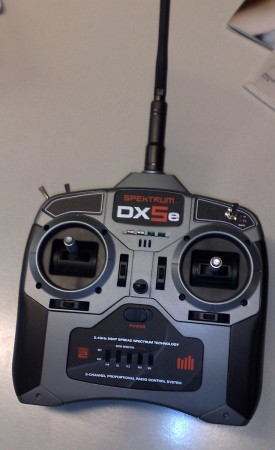 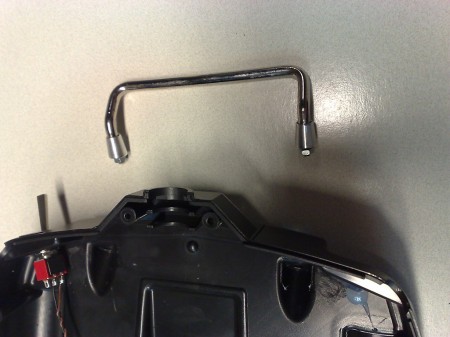 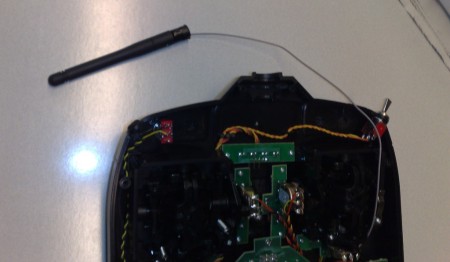 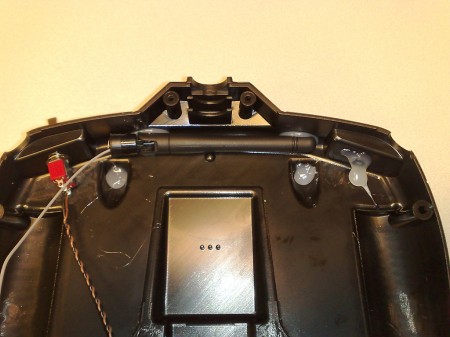 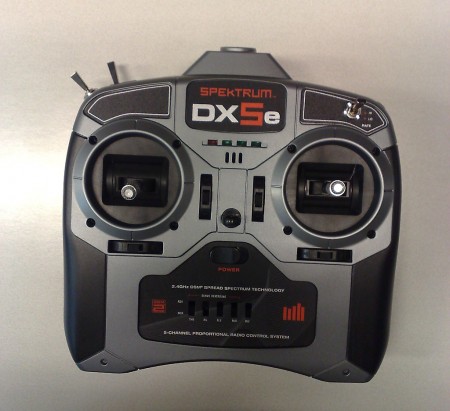 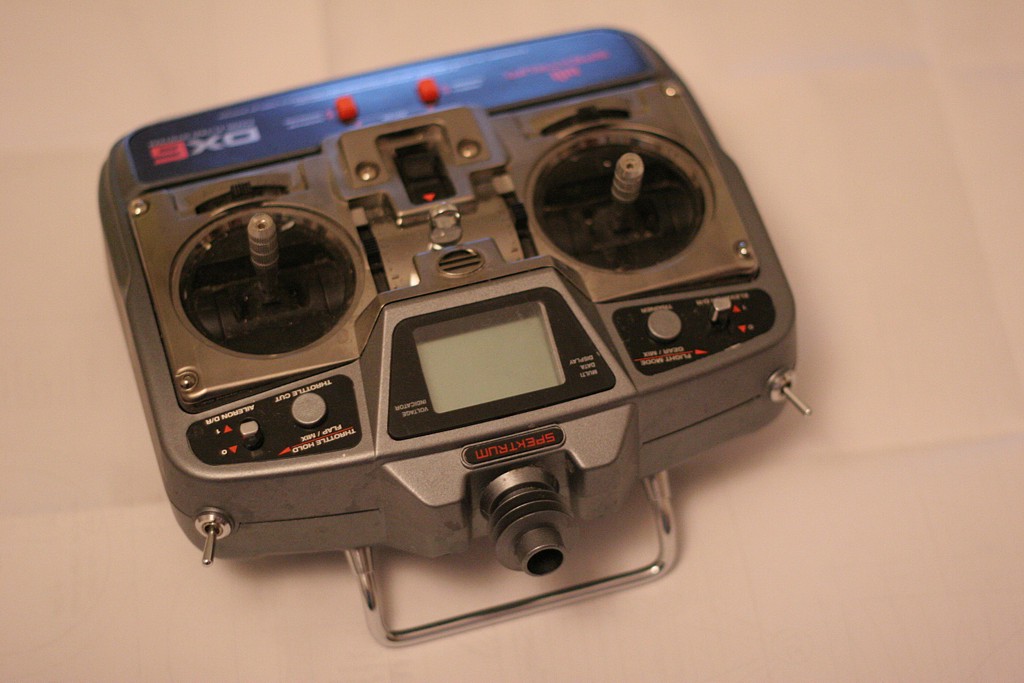 By popular demand, some notes on how I've placed the antenna of my Spektrum DX6 transmitter inside the case. I've been using the radio like this ever since I got it and provided that you hold up the radio more or less vertically and not hide behind large metal constructions or things like that the range is fine. The benefit of the internal antenna is that I don't have to worry about breaking it while sailing it or storing the protruding thing in the toolbox. When it rains it's nice to fit the whole transmitter into the rain-cover which doesn't have any (potentially leaking) holes (other than the two holes for my hands!). A plug for the antenna hole to prevent dirt etc. entering the Tx would probably be a good idea.

If someone has a feeling for what theoretically a 2-3 mm wall of plastic does to an RF signal at 2.4 GHz, let me know. 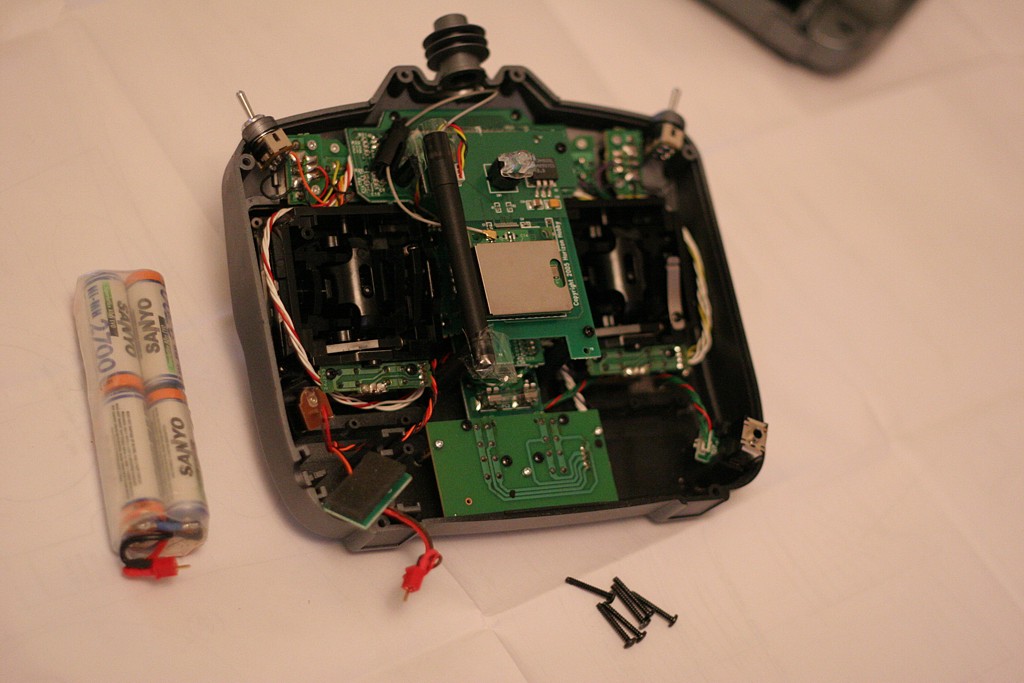 Here is the back cover and six screws that hold it removed along with the battery (I've put Deans connectors on the Tx battery to simplify charging). With a stock DX6 the antenna would be sticking out at the top and there would be a few extra pieces of black plastic supporting it. I remember I broke some of those black plastic parts when I disassembled the antenna - so proceed carefully if you think you want to go back to the stock configuration sometime. I didn't touch the electrical connection of the antenna at all, the thin grey coax that comes out of the antenna attaches to the RF PCB just like it does on the stock Tx. 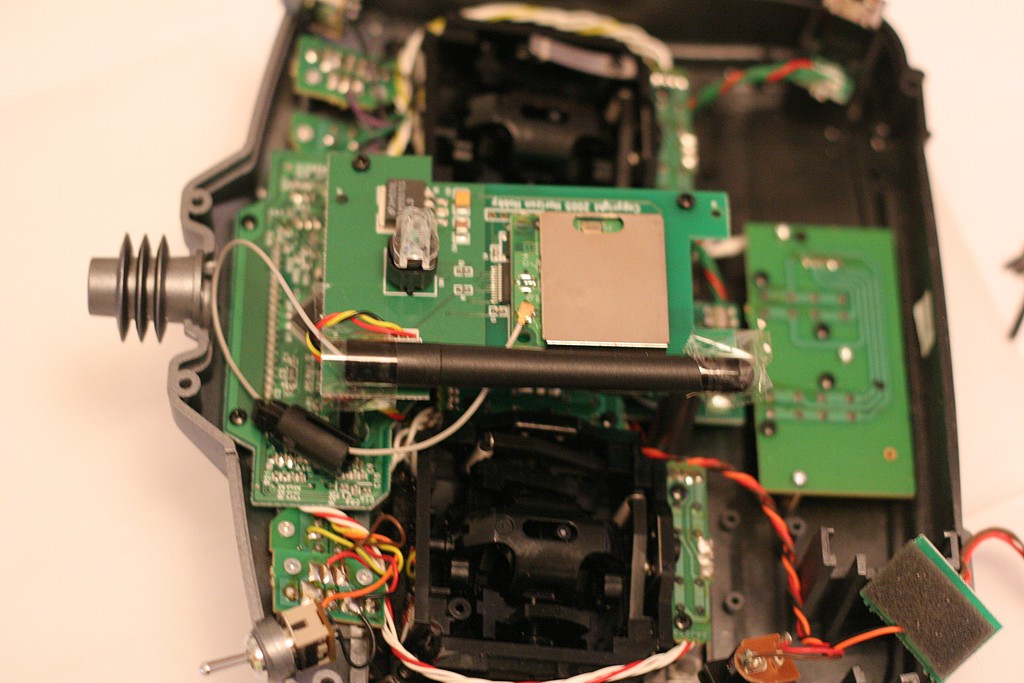 Here's a close-up of the antenna. You can see a part of the old antenna-hinge around the grey coax to the left (a bit dangerous to cut it away with a knife or pliers since you risk damage to the delicate coax). I've taped the antenna upside down to the RF board. There are probably other places inside the case the antenna could fit as well, but this seems to work OK.

If anyone has done something similar do let me know! I'd be happy to post pictures here if you send them to me.

Spektrum: I hope you are taking notes, I expect your next radio to have an internal antenna! 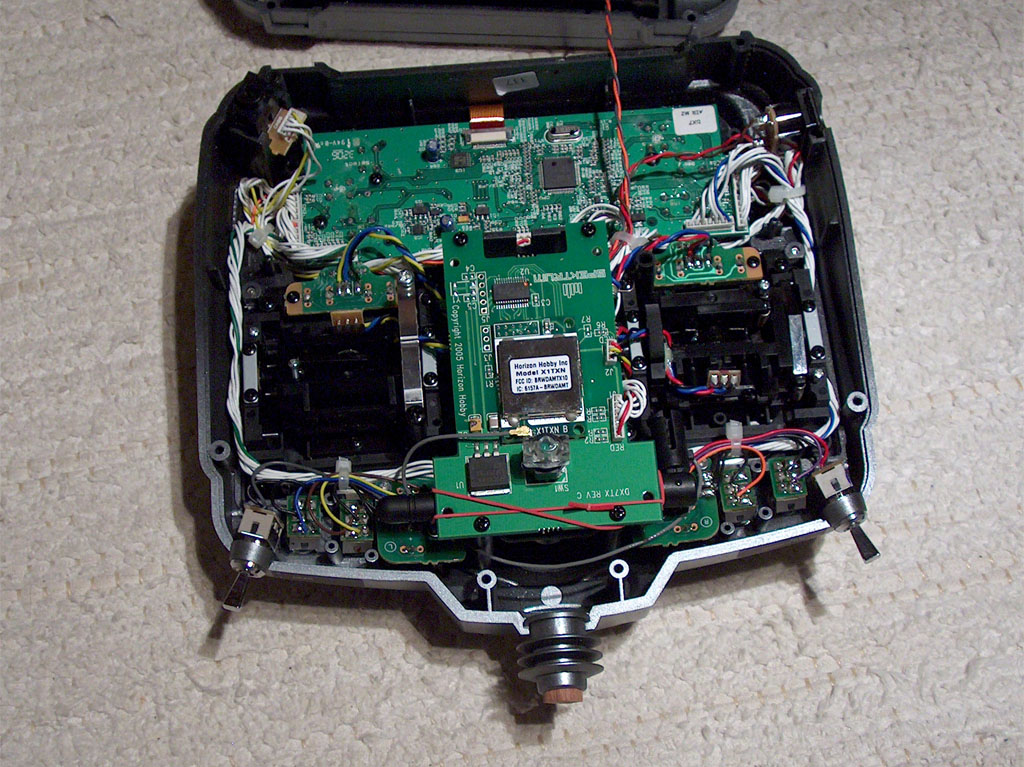 Olle Martonen sent me this pic of his modified Spektrum DX7. He mounted the antenna horizontally behind the regulator/switch PCB. Also note the wooden plug in the antenna hole. Not much sailing done with this system yet, but range-checking on the ground indicates there should be no problems.

I also got some observations be email on RF issues from a mobile-phone perspective: A few mm of plastic will not attenuate the signal measurably. Conducting materials are worse, like some mobile phone shells that are covered with carbon-containing paint, or your fingers on the back side of the transmitter. My placement of the antenna close to the RF-box (the metal square), and the PCB (also metal-coated), is not optimal, and could lead to an attenuation of 3-5 dB. A distance of 2-3 cm to the conductive parts would be better, so I'll maybe look for other places inside the Tx where the antenna could fit (Olle's example above is a bit better since the antenna is farther away from the RF-box).

Winston Mathews sent me this picture along with a description: "Here are our modified DX6 radios. 2200 mAh batteries, new voltage regulator, jib-trim potentiometer and now "internal" antennae (mounted horizontally). Range is unaffected. Thanks for the idea and your help. I would advise to install the voltage regulator. We can sail for two days without recharging. " Photo by Jack Wubble, owner of the open radio in the pic. Discussion on this is over at the EC12 discussion forum. 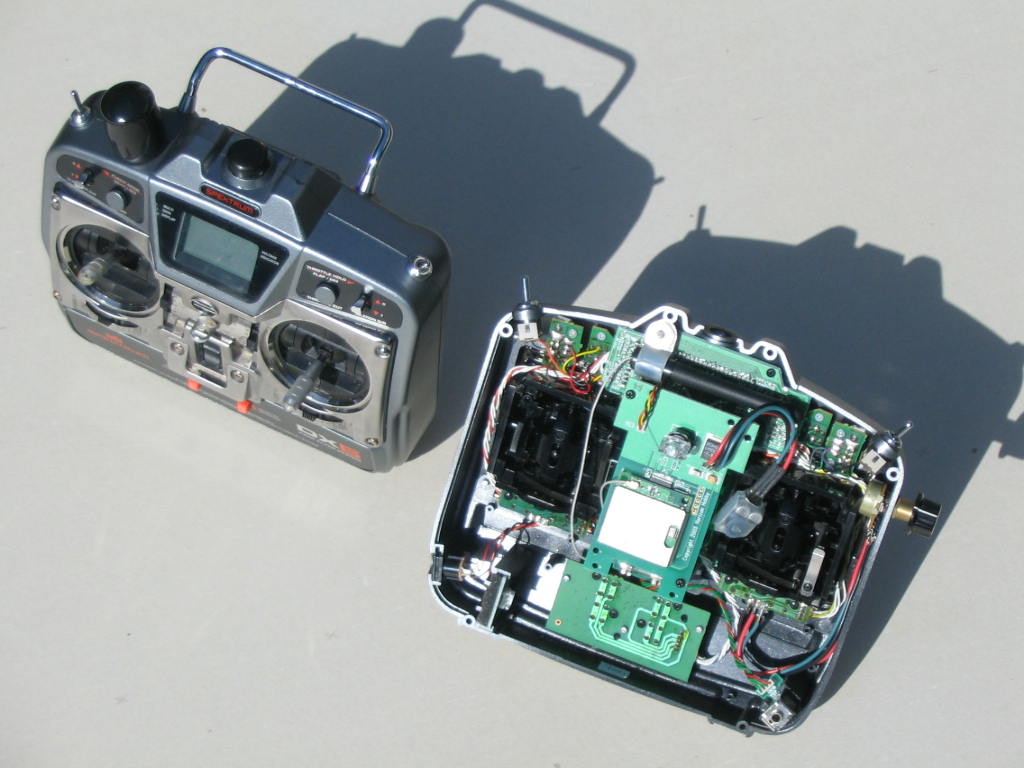 Some text and images on modifying a Futaba 2.4 GHz radio on the EC12 website. 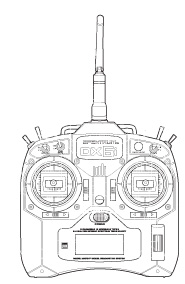 Spektrum recently introduced an updated version of the DX6: the DX6i. Horizon Hobby also has an article on the new radio.

This one uses 'DSM2' technology which is described as giving 'full range'. Not sure what that means, but range should be better than with the first generation of 2.4 GHz radios, which at times was problematic (if you did something specific that cut down on the range).

I think the original DX6 was more or less a carbon copy of an existing JR transmitter, but the DX6i seems to be a new ergonomic design. Instead of buttons for navigating the menu it has a roller-device, and there's a new bigger LCD for programming.

The antenna still sticks out at the top even though nobody has had a mobile phone with an external antenna in years. I've mounted the antenna on my own DX6 inside the plastic case and it seems to work fine. I predict and hope that the next version in 1-2 years from spektrum will have the antenna mounted inside the Tx (no fear of breaking it, no problems with leaking rain-covers).

It's going to be in stores in December, for around $180 without servos, which is similar to what the 6-channel 2.4 GHz Futaba sells for. 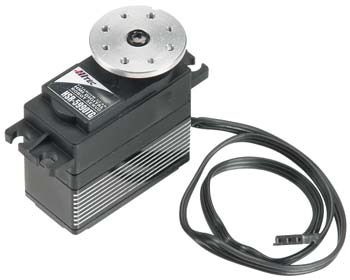 Maybe this is the winch for my next boat? At a cost around $110, weight of 68 grams, and 'ludicrous speed', it looks like a strong alternative to a drum-winch. Anyone have good or bad experiences with the 5995 or the new 5990?

Spektrum has come out with a new 7-channel system called the DX7. It's not on their website yet, but Horizon hobby has it for sale. This one is supposed to be a radio for 'real' models, not only meant for park-flyers like the DX6. I wonder if there will be a problem with 'CE' approval with regards to the output power - A rumor I heard was that the 'CE' marked version of the DX6 has a reduced output power compared to the US model ??

There's also a new player on the market, Xtreme Power Systems, which will introduce their new xtremelink module+rx combo shortly. They too promise increased range and reliability. In contrast to Spektrum, who talk about either 40 or 80 simultaneous working modules, Xtremelink claims up to 390 000 simultaneous active modules ! Also, up to 1 mile ground based range. Pricing and deliverytime still open.

The Futaba modules I noticed back in January were on display at Model Expo in the spring but the local agent said it would take some time before they come to market. I've detected no activity in the Futaba camp so far...

For the new boat, I've bought myself a DX6. Naturally I'm going to mod it a bit before use ;). I've ordered a switched-mode regulator which supposedly will reduce the current drain of the Tx a lot. Also, I've gotten very used to the 'no antenna' look and feel of the Futaba 3VCS with a Spektrum module (especially usefull when it rains, the whole radio goes inside the Tx-cover, no leaking hole for antenna needed). But the stock DX6 has an antenna that sticks out :(. Cell-phones have had internal antennas for years and nobody buys phones with external antennas anymore - so the DX6 antenna needs to go inside the case too ! I'll report later how that goes... 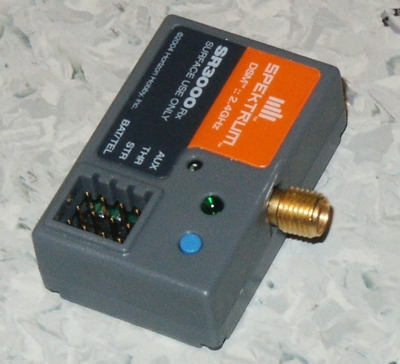 This is the modified Spektrum receiver I have been using with my Futaba 3VCS this season.
END_OF_DOCUMENT_TOKEN_TO_BE_REPLACED