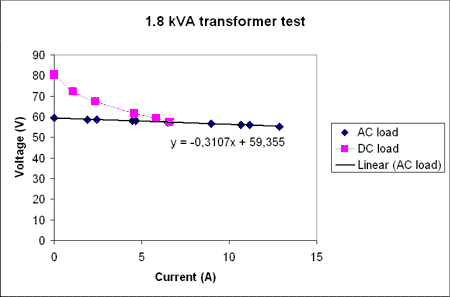 There was something strange going on when I measured the transformer last time, and since that I've gotten a few pointers from visitors to the blog and the CAD_CAM_EDM_DRO list.

I now did a test without the inrush current-limiter, and it does make a difference. It is rated for 8 A continuous current, but apparently it limits current much before that...

Then I hook up the secondary to the diode bridge and the caps and connect the same set of resistive loads as before. That's the 'DC load' measurements above. There again I see a big drop in voltage at first that then levels off somewhat. For the points above 5 A current the voltage drop is around 2 V per amp, or about a 2 Ohm effective series resistance. Also, the transformer does not emit any sound at all during the AC test, but now with the rectifier and caps when I load it up there is a slight 'humm' sound(probably 50 Hz and its harmonics).

I wonder if that 2 Ohm is typical or if there still is something strange going on? (could the rectifier bridge be too small? Anything wrong with my 4x 10 000 uF 100 V electrolytic caps?)

One thought on “Transformer test”