By popular demand, some details on the spindle, spindle-motor, and VFD of our cnc-mill which just recently was able to do rigid-tapping. 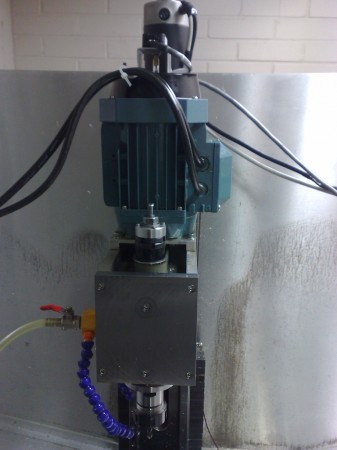 The motor is a standard induction motor from ABB rated at 1.5 kW and around 3000 rpm (at 50 Hz AC). It has a lot of model identification numbers: "1.5 kW M2VA 80 C-2 3G Va 08 1003-CSB ". There are more details on this line of motors on ABB's site, but this kind of motor should be available from almost any manufacturer of industrial induction motors. Presumably torque drops off after the rated maximum rpm of 3000, but with small diameter tools we have been running the VFD up to 90 Hz or around 5400 rpm. When taking heavy cuts the VFD tries its best to keep the rpm up, but we do observe a 100-200 rpm drop when a 40 mm face-mill digs in. It might be possible to wire the encoder counts to the VFD and get a truly closed loop system but I doubt it's worth it.

The motor is connected to an Omron Varispeed V7 VFD with a maximum motor capacity of 1.5 kW. I can't find a good link on the international Omron site, so here's one in finnish instead (datasheet here). This is a sensorless vector-drive VFD, which is very important - with the previous simple V/f open-loop VFD we could only do machining close to maximum RPM and certainly would not have tried rigid-tapping. The electrical connection is simple with the VFD connecting to 1-phase AC mains and then the three phases from the VFD connecting to the motor.

The VFD is controlled by EMC2 using three general purpose IO pins on the m5i20. One pin sets the rpm (VFD reference frequency) using a pulse-train generated by the stepgen HAL component (step_type=2 ctrl_type=v). The two other IO lines set the VFD to either forward or reverse.

On the hardware side of things there is a 1:1 belt drive to a littlemachineshop MT3 spindle (more here).

Below a close-up of the US Digital 500 ppr encoder mounted on top of the motor. There's a cooling fan driven by the main motor axle on top of the motor and we tapped the axle with a M6 thread, inserted an M6 set-screw, and coupled the set-screw to the encoder using plastic tubing. The encoder sits on a alu-bracket which is bolted to the fan grille. Z-axis servo in the background.