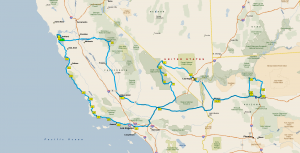 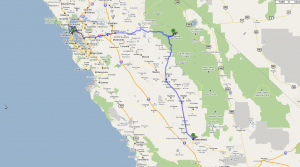 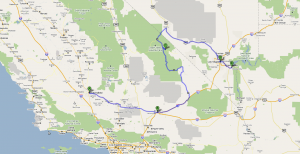 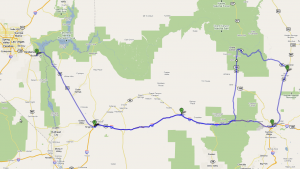 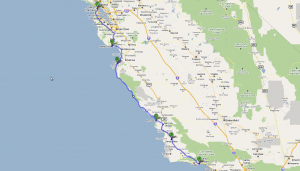 Drove up California state route 1 from Santa Barbara to Morro bay, Monterey, and Santa Cruz before running out of daylight and switching to 101 for the rest of the way up to San Francisco.

After Grand Canyon we drove all the way to Kingman, AZ. On day 4 of the roadtrip the Prius rolled back west via Barstow, Victoville, San Bernardino, and towards the end a slow drive through a gigantic LA with both very poor neighborhoods and very rich ones, plus everything in between. The contrast between all the wilderness/desert and the endless LA city blocks is stark. The day ended with a drive up to Santa Barbara.

Pictures from day 3 of the roadtrip:

I will write more about day 2 of the roadtrip when I have time. For now, only pictures here: http://picasaweb.google.com/anders.e.e.wallin/DeathValley#

Picked up an almost brand new 2010 Prius (only 6000 miles on the odometer) at Hertz today, and headed east towards Yosemite National Park.

Yesterday was rainy, and the forecast for tomorrow is wet too, so when the sun came out today we saw it as an opportunity to go see the Coit Tower.

I'm in San Francisco for the 54th annual meeting of the Biophysical Society.

This is already my fifth BPS meeting, the previous ones were:

Two years ago I only had time for this picture, but today I had a chance to properly see the USS Midway (see also here).

It's easy to spend 3-4 hours on the ships various decks listening to the audio-guide. I could have done without the birds hovering over my lunch at the cafe, but otherwise this was an excellent visit!

Part of the excellent public transport in Boston is a boat from Long Wharf which  goes south down to Quincy. A nice way of seeing Boston from the sea, and part of the islands outside the city.