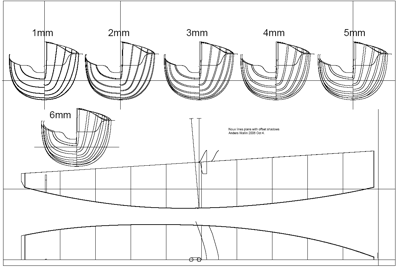 I've had a couple of requests for reduced shadows for the Noux by people wanting to home-build the boat using planking or other methods. Here are the lines with 1-6mm offset from the outer hull surface. A DXF file is attached to the pdf, click the small paper-clip next to the text to save the DXF as a separate file 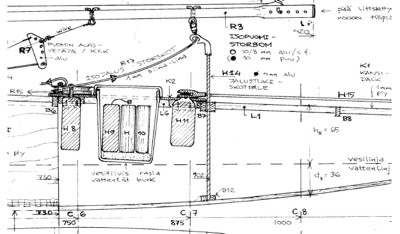 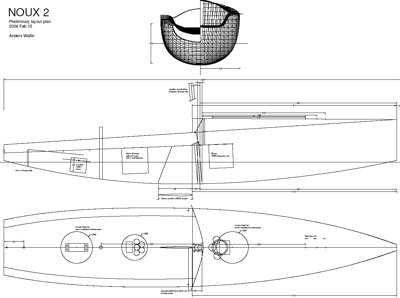 An updated layout plan for the Noux-2 with the winch placed under the foredeck and a circular theme for the hatches.
There's also been a request for a 3D IGES model for the Noux-2 so here it is.

Update 2006 May 03: Hsinli Liu ponted out some problems with the previous IGES file. I have made a new one which should be at better resolution: Noux2_2006may03.IGS 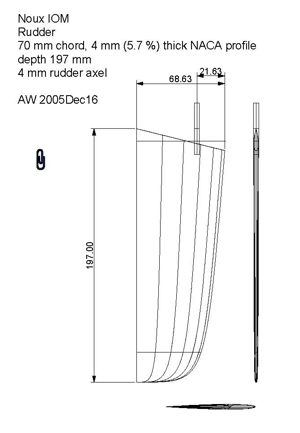 Finally decided to make some proper rudder moulds for the Noux. This design, based on the rudder a number of Noux boats have been using for 1-2 season, was chosen. It's a simple(based on a Marblehead rudder by Bob Sterne actually) moderately deep rudder with a fairly thin section (just enough to accomodate a 4 mm rudder stock).

Below some pictures from the CNC milling of aluminium moulds.
END_OF_DOCUMENT_TOKEN_TO_BE_REPLACED 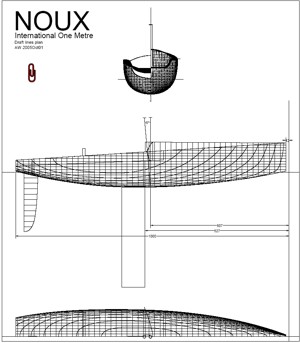 Draft lines plan for the Noux.

Since publishing the bulb mould plans there has been a couple of requests for a drawing of only the bulb. Here it is. It's a round cross section 350mm long NACA 0010-34 bulb.

I'm using a feature of Adobe Acrobat 6.0 to attach a DXF version to the PDF file. Open the PDF in acrobat reader and access the DXF by right-clicking on the paper-clip on the right and choose "save embedded file to disk". 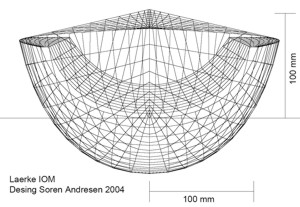 SÃ¸ren Andresen (DEN) sent me the plans for his own design with which he won the 2005 Nordic Championship and placed 2nd in 2004. He also sailed it into 35. place in the 2004 Euro Champs in Arcos/Spain.

The PDF file contains the sections and a drawing with the mast and keel positions but you should really download the DXF file and printout accurate sections with a CAD program if you want to build the boat.

END_OF_DOCUMENT_TOKEN_TO_BE_REPLACED

Our bulb moulds are CNC milled from aluminium and more than 15 bulbs have been made successfully from them.

Note that it could be useful to make the hole through which lead is poured in a little larger than shown on the plan.
END_OF_DOCUMENT_TOKEN_TO_BE_REPLACED 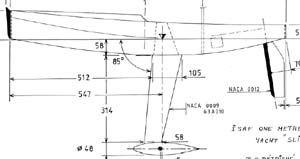 Charles Detriche has kindly allowed me to publish one of his IOM designs. This one is called "Sliver". 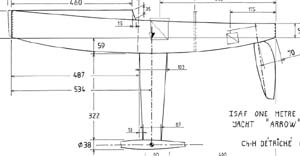 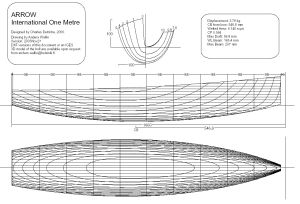 Charles Detriche has kindly allowed me to publish one of his IOM designs. This one is called "Arrow".