A progress update on the building of the second generation Noux IOM - by Olof GinstrÃ¶m and Anders Wallin.

The lines of the hull have not chaged. It's still the same design from 2002 which is loosely based on the Triple Crown and a bunch of other design I have in my computer.

We are now moulding the hulls with three layers of 163g/m2 twill-weave glassfiber first wetted out on a flat table and then fit into the mould by hand. We've again heat-cured the hulls which unfortunately has resulted in "print" appearing on the mould and hull surfaces. I think we've now finally learned that glassfiber moulds cannot be heat cured - it will damage them whatever the heat resistance of the mould resin/gelcoat is advertized to be...

The deck is joined to the hull with a traditional wooden plank all along the join. Here we are gluing first one 3x8mm abachi strip along the hull and then one at 90 degrees. 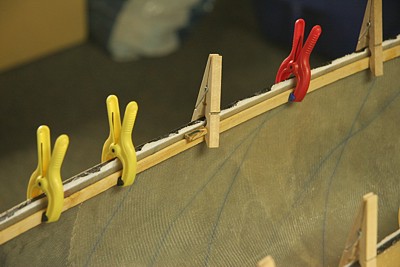 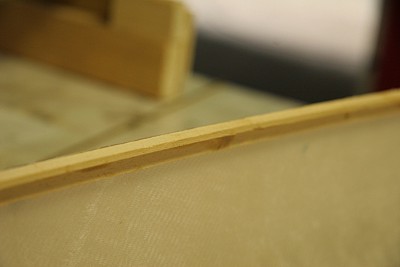 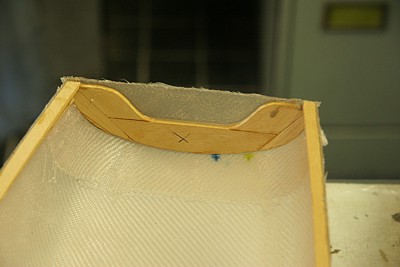 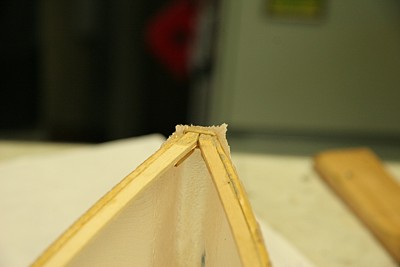 As a general principle we've found that it's much better to try to concentrate as much of the building as possible into as few phases as possible. So this time around we are moulding the bow and transom at the same time as the hull (in 2002 we did not). It's a bit more complicated and fitting the glass to the bow can be quite fiddly - but it results in a ready hull directly from the mould. Above the transom and bow are reinforced with abachi.

Apart from building techniques and more attention to detail, the biggest change for mk2 of the Noux is the deck. We're trying a two-part cockatoo style deck, which I've written about earlier.

The deck moulds are unfortunately not ready yet so I will have to come back to them later...

Another change we wanted to do was to have more room to adjust the position of the mast. So we designed a new finbox wich should have plenty of adjustability. We did not want to carry a whole lot of water in the mastbox, so we made it only 5mm thin. That means that least on the mk2 prototypes the mast will have to be extended with a 5mm aluminium piece which goes from deck-level to the bottom of the hull. For mk3 we will hopefully have found the optimal mast position and a more conventional mastbox with one mast position but allowing rake adjustments can be used. 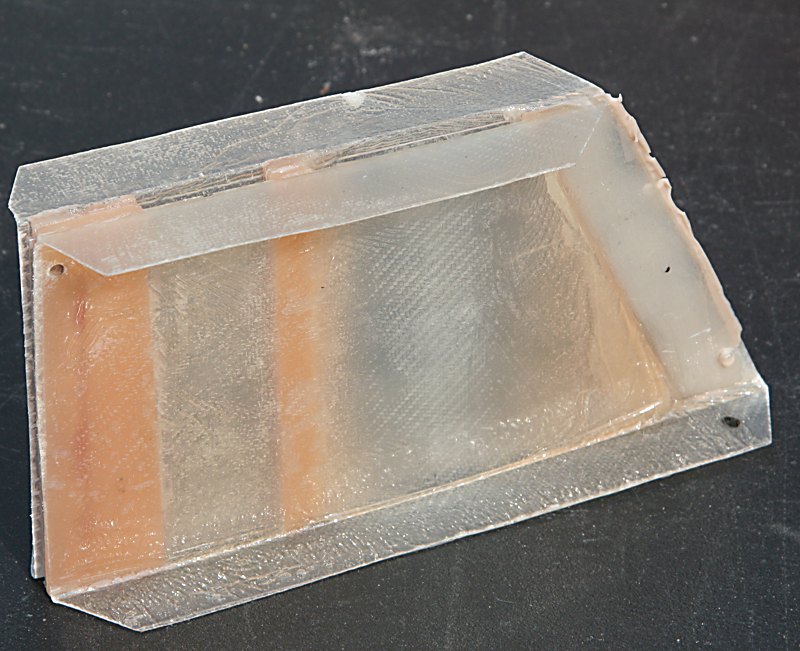 We are going to use the proved 85mm chord 6% T/C NACA fin for which we have aluminium moulds. Here are a few fins, to the left an epoxy-microballoon core which is moulded first. The skins are 200g/m2 plain weave carbon laid out at 45 degrees and inside of that is about 400g/m2 of unidirectional carbon laid out along the length of the fin. Epoxy mixed with fumed silica works well as a transparent gelcoat. 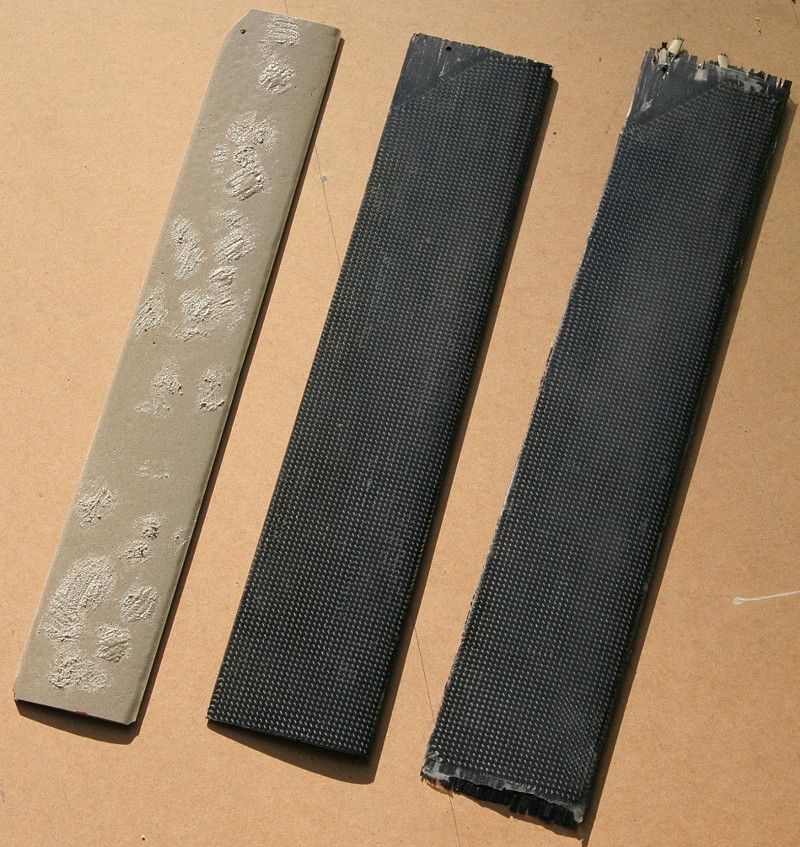 We're moulding both the fin and the rudder with the same principle. First a core of epoxy-microballoons is made, then the skin-layup is done in the two mould halves, and then the mould is closed with the core inside. We have a separate mould for the fin core.Â Previously the rudder core has not be pre-made but the mould halves just filled with epoxy-microballoon at the time the skins were laid up.

A new 'aha' moment came, almost accidentaly - like most innovations,Â when Olof tried moulding the rudder core in the same mould as the rudder itself. So the whole of the ruddermould is first filled with epoxy-microballoons and when that has cured the core can be taken out and lightly sanded. That will ofcourse leave very little extra room for the carbon skinsÂ - but on the rudder these are only one layer of 200g/m2 carbon which is not going to be very thick. When the skins are laid up and the core inserted I understand there was a bit of compression and fiddling to get the mould to close correctly, but eventually it did.

The final rudder is only a few tenths of a mm thicker than a rudder made the old-style way, but we see big improvements in the surface finish and stiffness. The new rudder also has a very solid overall feeling. A rudder made this way is not among the lightest, but at least it's very strong. The picture below doesn't do justice to the surface quality, it's close to what you can expect from Sails ETC ! 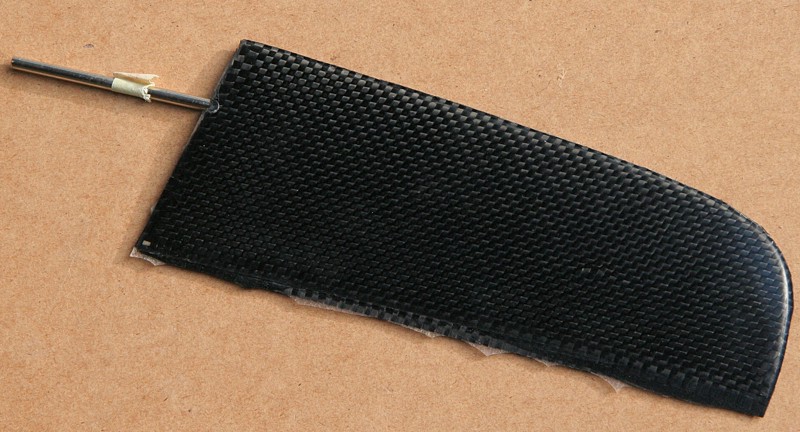 So, we will definitely have to experiment with a closer fitting core and more compression on the fin also. Since the skins on the fin are about three times as thick as on the rudder I don't think making the core in the finmould will work, but manufacturing a cnc cut core-mould for the fin should not be a problem once the cnc-mill is upgraded.

I was impressed with the radio installation and deck configuration I saw on Craig Smith's new Obsession in Mooloolaba: 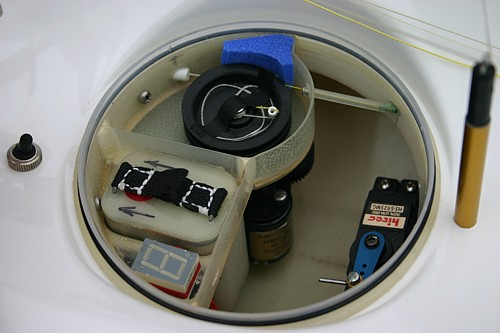 The boat has only one circular hatch, the rim and lid taken from a Decor food-container, and all the radio gear are installed through this hatch. No more deck-patches. EverÂ !
Craig has made a custom moulding that fits the rim of the hatch and attached the RMG winch, his no-leads battery pack, and the Rx + a flash display to it. The servo is mounted to a plate that hangs from the deck, attached just to either side of the sheeting post.

Gary Cameron has also adopted a similar layout on his TS3: 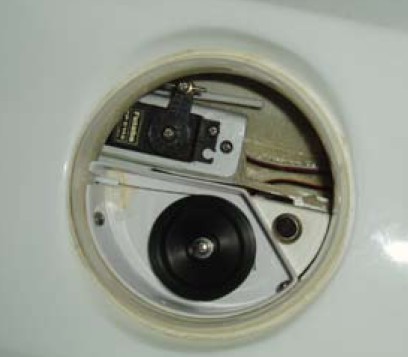 The winch and the servo are clearly visible, but as I have not seen this boat in person I don't know where the battery and Rx are.

I'm going to use the RMG winch, but Olof prefers the smaller and lighter Graupner Regatta winch, so our system should allow both options. The latest idea looks something like this: 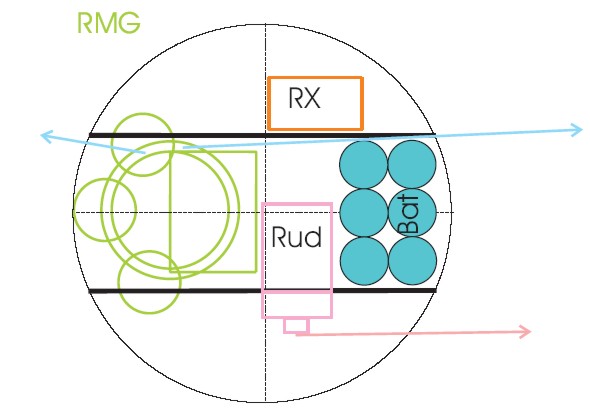 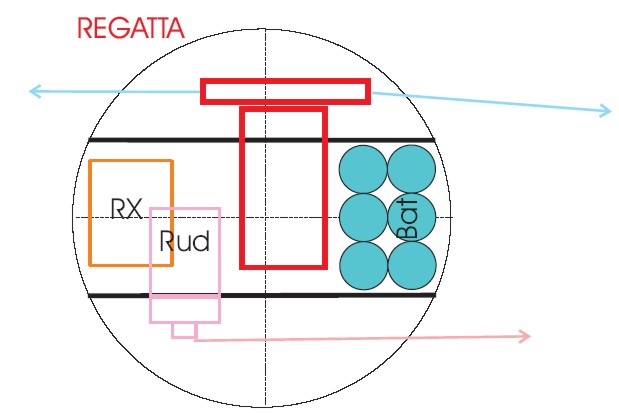 The thick black lines are vertically mounted sheets of rigid glassfiber (PCB board is a convenient supply). They form a 'pot' for the battery to sit in, there's a cutout in one of the sides which allows mounting the rudderservo (pink) vertically, and a horizontal PCB piece which forms the mounting plate for the RMGÂ is glued in-between the lengthwise boards.

In the Regatta configuration the which is mountedÂ similarly to the servo in a vertical position with the drum to one side and the rudder arm to the other. Note that the regatta uses a significantly larger drum than the RMG.

In both cases the sheeting system will look similar to the one Craig uses on his Obsession:

An endless loop starts at the winch (dashed line), goes aftwards through some plastic tubes and comes out on deck through another plastic tube (yellow). The line (green) then continues aft to a block at the transom(blue) and dives below deck again somewhere around the bulkhead (U-shaped yellow tube) to come back to the drum. The mainsheet (orange) needs a block or a loop to pass through somewhere around the bulkhead before it is continues to the sheeting point. Similarly, the jibsheet is routed forwards to a suitable sheeting point for the jib. On my current boat I've sometimes had problems with the jibsheet hooking around the wire-loops that guide it or around the winch, the gooseneck, or the mast partners - That's why I'm considering having the jibsheet in an internal tube (yellow) that starts at cockpit deck level and comes out at the sheeting point on foredeck. Should eliminate the hooking/snagging problems.

For the radio, I've been happy with the DSM system on my Futaba 3VCS, so the new boats will probably be equipped with the Spektrum DX6.

First our goal was to get the new boats ready this year (the season ends in November at the latest in Finland), but now it seems that due to various delays that is not going to happen. So there's lots of time during the winter to design and manufacture any custom fittings we can come up with.

A ball-raced gooseneck/mainboom fitting was the first thing we thought about. Here are a couple desings I've found on the web: 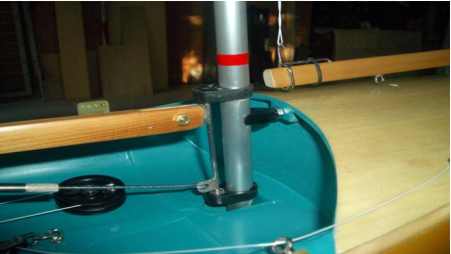 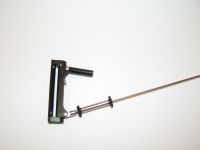 A heavily modified Sails ETC fitting on an Australian boat at the Vancouver Worlds: 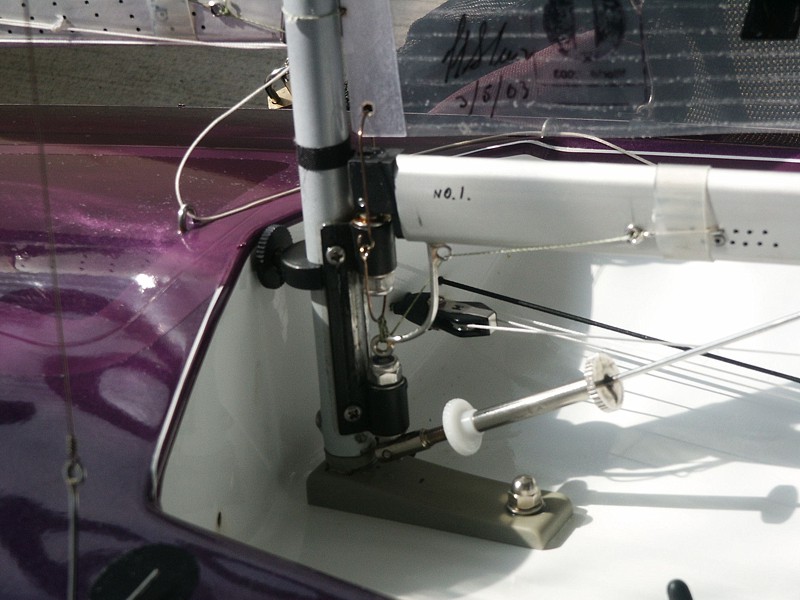 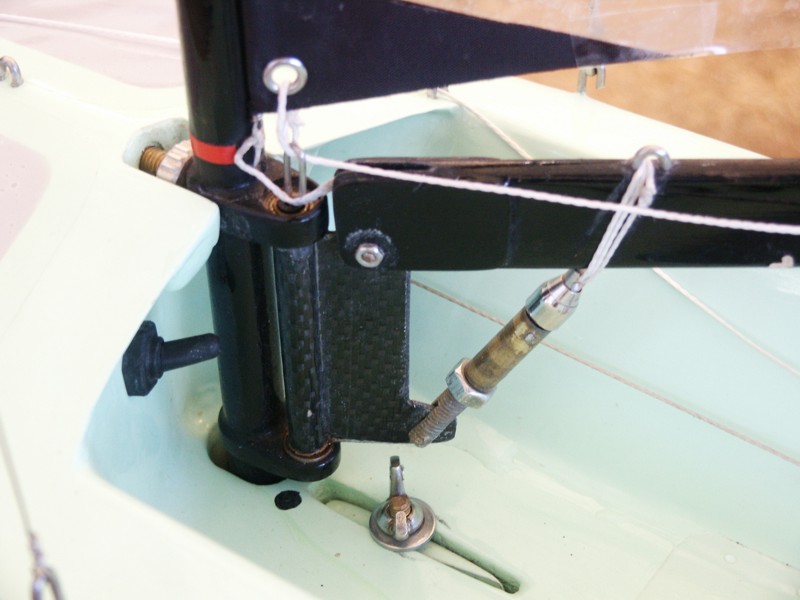 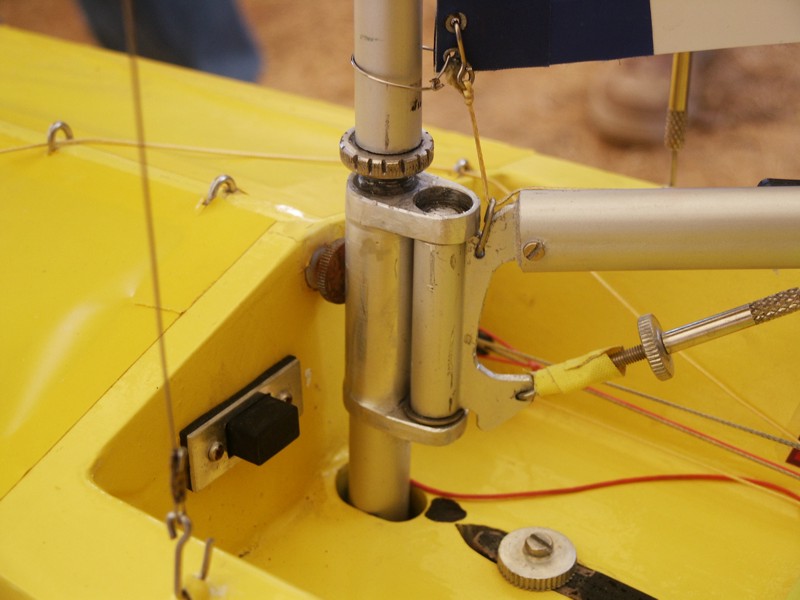 I've found a good source for miniature ball bearings in the UK: www.smbbearings.com, quick responses to emails, order by fax+visa card,Â and about three days delivery to Finland - excellent !
The only small minus for smbbearings is that they do not have their prices online. Expect to pay around 3 to 5 eur per bearing for the stainless steel versions.