Another rack-PC put together this week. Intel X99-chipset with LGA2011-3 CPU socket. Only PCI-e slots, no legacy PCI-slots.

Again I didn't get the polarity of the HDD-LED and Power-LED wires right on the first try. How come the industry cannot agree on a standard connector for the bundle that has the power-switch, reset-switch, HDD-LED, and Power-LED?

Another glitch was that this board has 8 slots for RAM, and the two RAM-sticks I got need to be installed exactly in the right slots - otherwise it won't even boot into the BIOS. Some reading of the motherboard manual was required.

After installing Ubuntu 14.04LTS (from USB-stick! No CD/DVD required) the NVIDIA-drivers (for the GTX750TI) were not automatically detected. I downloaded the latest driver from NVIDIA and installed it manually. This requires logging in to a text-only console (CTRL-ALT-F1), and then killing X for the duration of the install (sudo service lightdm stop)

There is a problem with this install because the environment variable KIGITHUB is not set. We do that by adding this line to ~/.profile

For this to take effect you need to log out and then log in again. You should now see KIGITHUB defined in the under Preferences/Library Tables in Pcbnew. I still have KISYSMOD undefined, but that doesn't seem to matter(?).

So far so good. Next stop is learning how to work with the kicad github plugin so I can store my own symbols/footprints in my own github repo.

Reinstalling Ubuntu on my laptop, a Lenovo IdeaPad Yoga 13".

For some reason the driver support for this laptop is not that great. Wifi, bluetooth, screen brightness control do not work with standard Ubuntu. Amazingly the touch-screen does work - but I don't use it much. The wifi driver is an absolute must, since the machine does not have an Ethernet port.

NTP to keep the system clock on time

Reasons to still have a Virtualbox Win-7 install:

Why hasn't things like these been fixed in the 7 months that 12.04LTS has been out?

Update4: Day 3 of this experiment. Machines have been online for more than 72 hours. In total 50Mb have been uploaded from laptop today (since reboot in the morning). That might be a good sign. All the files should now be in the "cloud". But are they synced to my other machines? Laptop still shows 18800+ files, desktop now shows 17800 files. Getting close...

Update3: Here's another observation, when the laptop, which still has about 11000 un-synced files in the One-folder, boots up, ubuntuone-syncdaemon can take 1-3 minutes of 100% cpu and about 300Mb RAM. After that it settles down, but 100% cpu means the machine is slow and unresponsive for a while 🙁

Update2: Someone at canonical asked for my log-files (they are in ~/.cache/ubuntuone/log/), and I've sent them. Hope they find what is going wrong!

Update1: the sync does seem coupled to a reboot. This morning it appears about 400Mb more was synced after a reboot of the machine. I still have about 11000 files un-synced after 48 hours.

These days data wants to be distributed and in the cloud. This image shows my Ubuntu One folders on three machines. They are supposed to be in sync, but are far from that after being connected to a high-speed network for more than 24 hours 🙁

OK, so let's go buy 20Gb of space on Ubuntu One, and transfer my working-set of work/hobbies/etc files there and see how it goes. I use about three computers regularly, a new laptop at work, and a  desktop and an old laptop at home. The work machine is on the university network where bandwidth shouldn't be a problem, and I have 40Mbit broadband from welho at home. What could possibly go wrong?

Ubunutu One is very very slow. I didn't just dump all my files and pictures into the shared-folder at once, I thought I'd start with a subset which happened to be 18064 files taking up 5.5Gb. It appears that in the first 24 hours roughly 700 Mb of data was synced. Now I have rebooted the primary laptop and it has very rapidly sent out another 500 Mb - but then slowed down to a creep. Is there a bandwidth-cap? For paying users?

Does anyone use Dropbox for lots (10s of thousands) of files? Does it work? Fast?

After upgrading to Ubuntu 11.04 there's no kdirstat anymore (it's installable by hand I guess, but why bother...).  filelight appears to be a nice replacement: 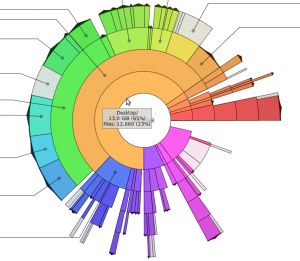 A failed powersupply was my excuse to upgrade most of the other internals of the desktop computer too. Some notes on adding a disk to LVM, following Suji's notes from 2007 (all of these require sudo):

There is more info in the LVM-HOWTO.

I've upgraded Ubuntu and EMC2 on the Atom 330 machine I have for controlling the lathe. The Atom 330 is a dual-core chip, but with Hyper Threading the OS can see four cores. That's not good for real-time performance, so the first thing I did was turn off HT from the BIOS. Next I did a distribution upgrade to 10.04LTS which downloaded about 1 Gig in an estimated 9 minutes (2Mb/s is OK I guess...). I then used the emc2-install script which installs the real-time kernel and emc2, and finally I edited /boot/grub/menu.lst by adding "isolcpus=1" on the kernel line. This reserves one cpu core for real-time and the other for non-real-time tasks. Without "isolcpus=1" the latency-test jitter values were easily 10k and more with a light load on the machine. With one core dedicated to real-time the jitter numbers start out at around 4k at light load and double to 7-8k under heavy load.

Here are some selected screenshots:

Next stop is getting the X and Z servos moving, as well as the hefty 2 kW spindle servo.