Another rack-PC put together this week. Intel X99-chipset with LGA2011-3 CPU socket. Only PCI-e slots, no legacy PCI-slots.

Again I didn't get the polarity of the HDD-LED and Power-LED wires right on the first try. How come the industry cannot agree on a standard connector for the bundle that has the power-switch, reset-switch, HDD-LED, and Power-LED?

Another glitch was that this board has 8 slots for RAM, and the two RAM-sticks I got need to be installed exactly in the right slots - otherwise it won't even boot into the BIOS. Some reading of the motherboard manual was required.

After installing Ubuntu 14.04LTS (from USB-stick! No CD/DVD required) the NVIDIA-drivers (for the GTX750TI) were not automatically detected. I downloaded the latest driver from NVIDIA and installed it manually. This requires logging in to a text-only console (CTRL-ALT-F1), and then killing X for the duration of the install (sudo service lightdm stop) 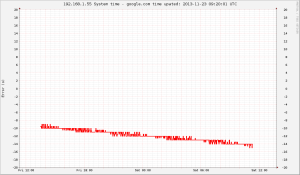 Reinstalling Ubuntu on my laptop, a Lenovo IdeaPad Yoga 13".

For some reason the driver support for this laptop is not that great. Wifi, bluetooth, screen brightness control do not work with standard Ubuntu. Amazingly the touch-screen does work - but I don't use it much. The wifi driver is an absolute must, since the machine does not have an Ethernet port.

NTP to keep the system clock on time

Reasons to still have a Virtualbox Win-7 install: 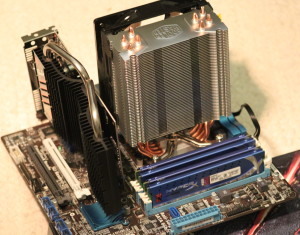 Some silence has been added to the desktop machine:

I had a GeForce 9800gt graphics card previously with good performance but bad power-consumption and noise. The new Nvidia GT640 card should be similar-ish in performance but much less power-hungry and completely silent.

Why hasn't things like these been fixed in the 7 months that 12.04LTS has been out? 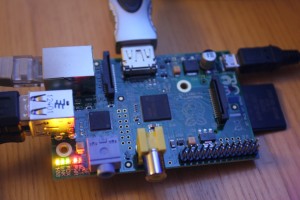 Update4: Day 3 of this experiment. Machines have been online for more than 72 hours. In total 50Mb have been uploaded from laptop today (since reboot in the morning). That might be a good sign. All the files should now be in the "cloud". But are they synced to my other machines? Laptop still shows 18800+ files, desktop now shows 17800 files. Getting close...

Update3: Here's another observation, when the laptop, which still has about 11000 un-synced files in the One-folder, boots up, ubuntuone-syncdaemon can take 1-3 minutes of 100% cpu and about 300Mb RAM. After that it settles down, but 100% cpu means the machine is slow and unresponsive for a while 🙁

Update2: Someone at canonical asked for my log-files (they are in ~/.cache/ubuntuone/log/), and I've sent them. Hope they find what is going wrong!

Update1: the sync does seem coupled to a reboot. This morning it appears about 400Mb more was synced after a reboot of the machine. I still have about 11000 files un-synced after 48 hours.

These days data wants to be distributed and in the cloud. This image shows my Ubuntu One folders on three machines. They are supposed to be in sync, but are far from that after being connected to a high-speed network for more than 24 hours 🙁

OK, so let's go buy 20Gb of space on Ubuntu One, and transfer my working-set of work/hobbies/etc files there and see how it goes. I use about three computers regularly, a new laptop at work, and a  desktop and an old laptop at home. The work machine is on the university network where bandwidth shouldn't be a problem, and I have 40Mbit broadband from welho at home. What could possibly go wrong?

Ubunutu One is very very slow. I didn't just dump all my files and pictures into the shared-folder at once, I thought I'd start with a subset which happened to be 18064 files taking up 5.5Gb. It appears that in the first 24 hours roughly 700 Mb of data was synced. Now I have rebooted the primary laptop and it has very rapidly sent out another 500 Mb - but then slowed down to a creep. Is there a bandwidth-cap? For paying users?

Does anyone use Dropbox for lots (10s of thousands) of files? Does it work? Fast?

To keep myself "forever" logged onto IRC, I wanted to run quassel-core on my isp shell-account, and quassel-client on whatever computer I am using at the moment (home/work/laptop, etc).

I first downloaded the statically linked core quasselcore-static-0.7.3.bz2 and unzipped it onto the server.

To use SSL, a certificate on the server is needed, made by copy/pasting from the quassel-wiki:

Then, my ISP doesn't have the port open that quassel uses (4242), so the connection needs to be tunneled through SSH. For testing a 'local port forwarding' tunnel can be opened like this (this is run on the client machine):

If I understand correctly this redirects traffic trying to connect to 4242:localhost through SSH (port 22), and actually connects to 4242:my.remote.server. However it isn't convenient to always have to type in the password when opening the tunnel, so I set up SSH login without password.

Now we can connect with quassel-client, specifying 4242:localhost as the server. When doing this for the first time quassel-client will ask for some set-up data. It's possible to use an SQL server backend on the server-side, but I'm using SQLite.

Then I started googling for advice on how to automatically start and keep alive an SSH tunnel on Ubuntu. There seems to be no consensus on how this is best done, and two or three attempts I tried failed. Most seem to use autossh. Ry4an's blog suggests an upstart script (but I couln't get that to work, and it requires a special user with no password). Or should it be done with a script in /etc/network/if-up.d ? Since I only use the this SSH-tunnel with quassel-client, maybe the easiest solution is to create a launcher-script that first opens the SSH-tunnel, and then launches quassel-client (how do I kill the tunnel when quassel-client exits?). Suggestions? sshuttle?

For now quassel-core has been running OK on the server for a few hours, and everything seems to work. I'll be able to test connecting with more clients from home later... stay tuned. 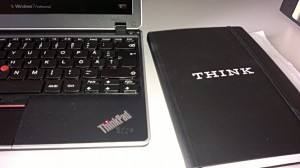