The second Nordic Cup event of the season was held on 19-20 August in Herslev near Roskilde in Denmark. 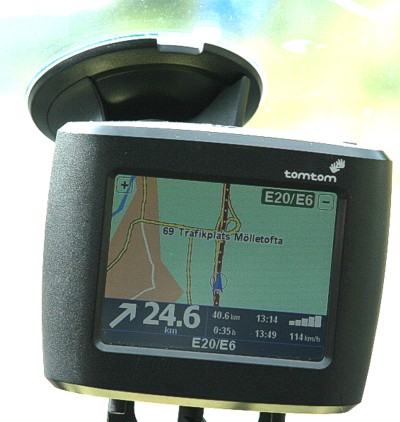 Our usual Finnish team of four sailors was reduced to three for this event. No problems, we brought along a new friend. Meet Matti - he lives inside this TomTom navigator and spends his time mostly sleeping, but wakes up at intersections to give driving directions. Apart from a stretch of new highway somewhere in SmÃ¥land, Matti was well aware of the situation and gave sensible advice most of the time. Highly recommended if you are driving to unknown places ! 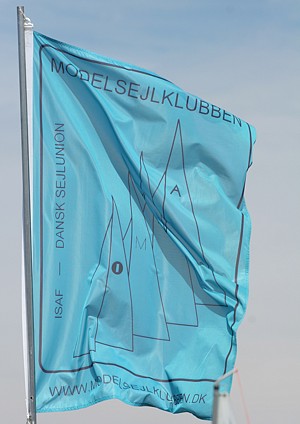 This time we were in Herslev, just to the other side of Roskilde from last years regatta. 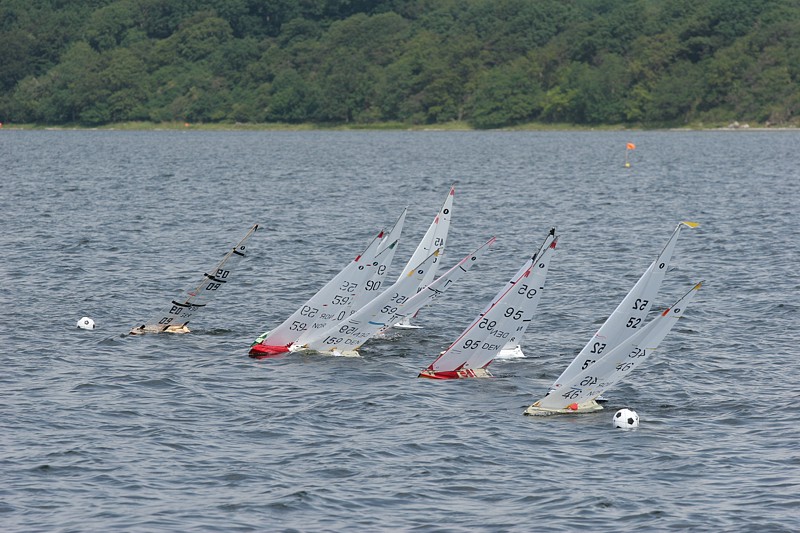 Practice on Friday already gave an indication of what was to come - it wasn't possible to sail more than one leg of the course before catching weed which effectively slowed down the boat. On Saturday five races were completed in warm summerwheater and light no1 rig before the organizers called it a day and hoped for less weed on Sunday. 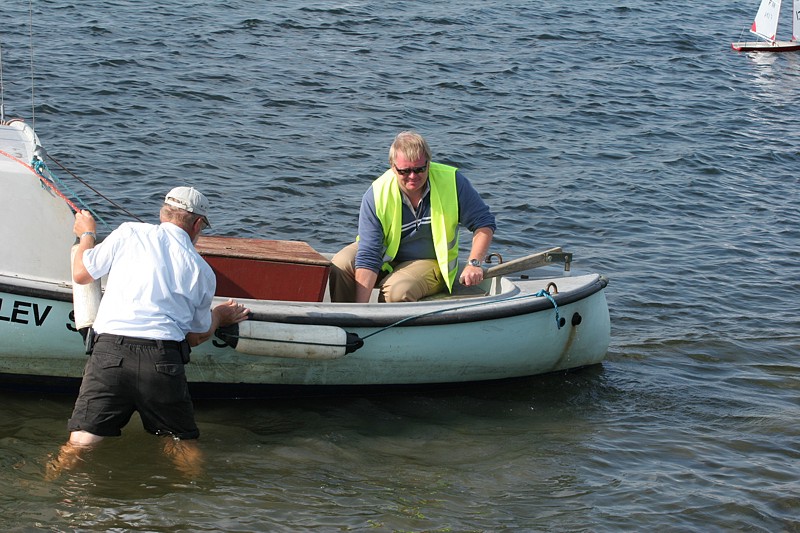 Sometimes, the rescue boat needs to be rescued...

Results and pictures on www.iom-nordic.org 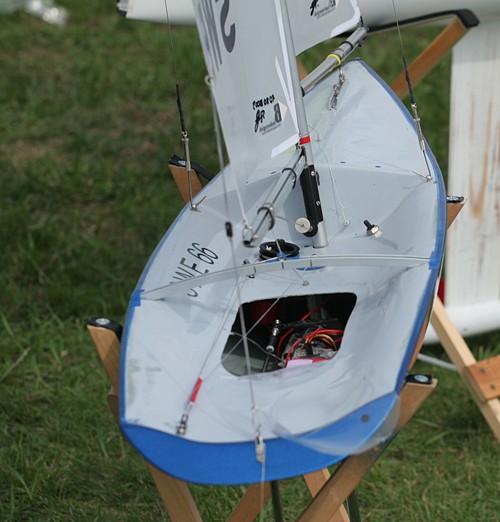 HÃ¥kan GrÃ¶nvall was the only Swedish competitor and sailed this updated Sphincter design. 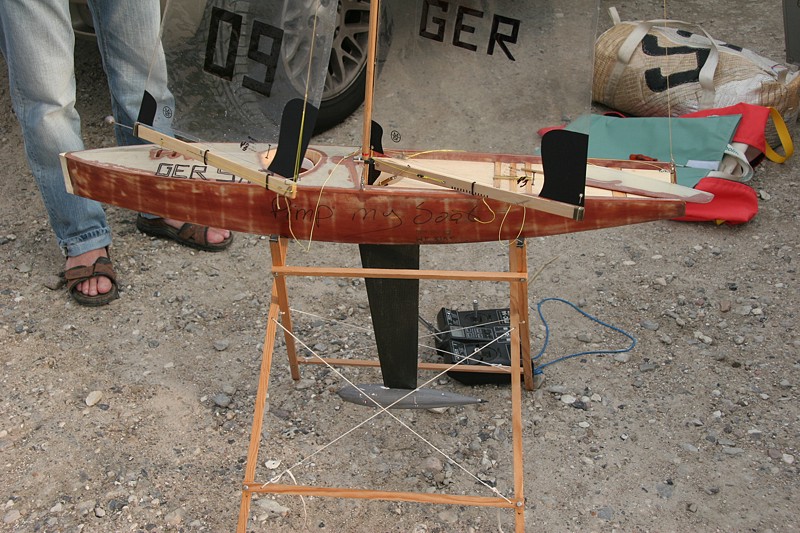 Homebuilt wooden masts are glued together from three pieces, also with a join lengthwise since the raw material is about 1000 mm long. Michael builds the forward pre-bend he wants into the mast when they are glued together. 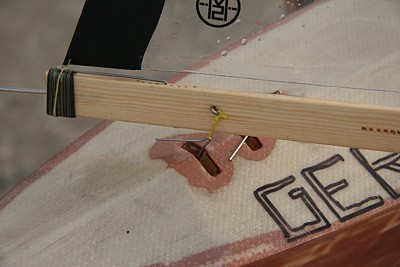 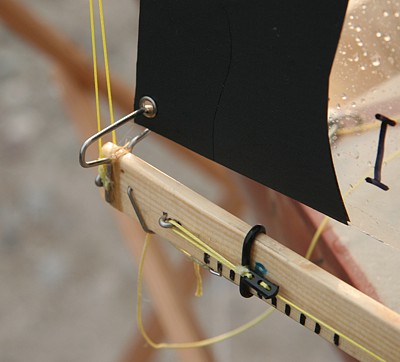 Two tricks to position the tack of the jib closer to the centerline of the boat. On the left we see the jib attached to the hull through a transverse slit that allows the swivel point to move sideways at sufficient wind pressure. To the right a new clew fitting which allows the clew to move outboard from the boom - the same effective sheeting angle is achieved at a smaller jib boom angle, thus positioning the tack less to windward. 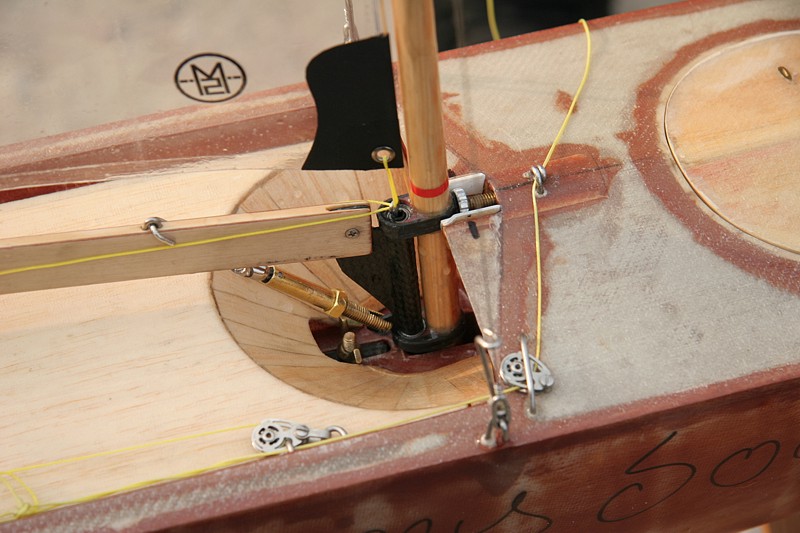 Homemade mainboom fitting. Michael now uses an extra deck-piece over the cockpit, similar to the tapes seen on the Disco design in Vancouver, to minimize the amount of water that accumulates in the cockpit. 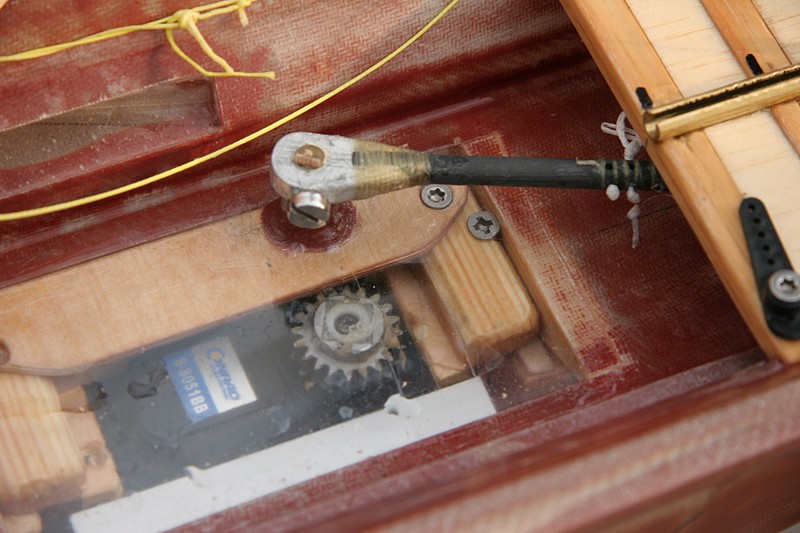 A geared servo acts as an arm-winch ! 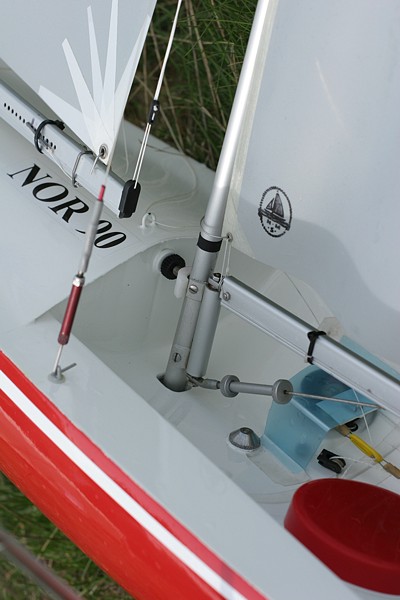 To the left Michael Scharmers way of attaching the shrouds. A simple and effective way to attach fixed-length stays. To the right another example of a homemade ball-raced gooseneck, this one from Morten Tonnesens glassfiber Laerke. Note also bottlescrews anodized green and red for starboard/port. 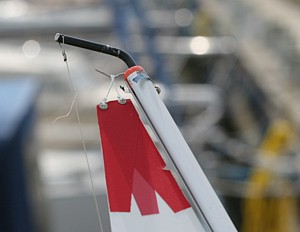 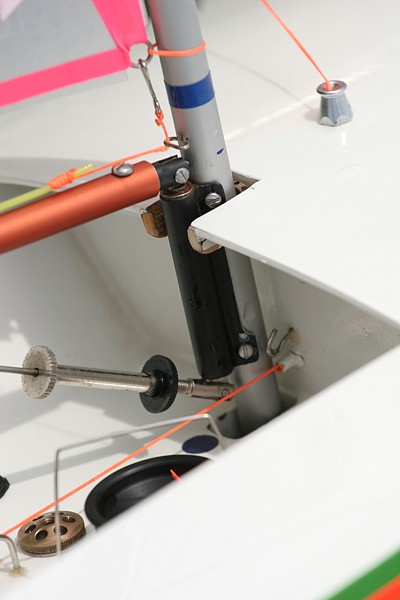 Two more details: A top fitting solution which completely omits the uppermost loop around the mast, from Gunnar Karlsen's TS-2. Right: a way of using a round arrowshaft mainboom with the Sails ETC gooseneck fitting. 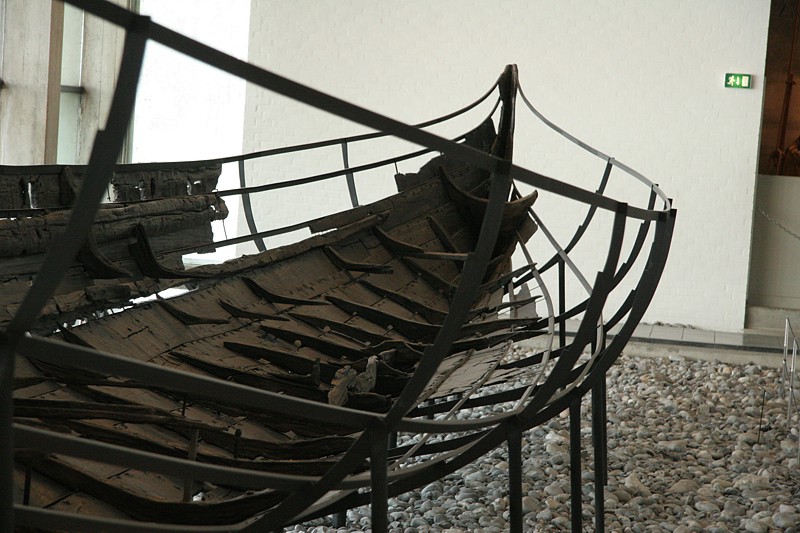 This is a site where several old viking ships have been found. The originals (above) are stored inside the museum, and an active study of viking ships and building/sailing techniques has resulted in many modern day replicas being built and sailed. 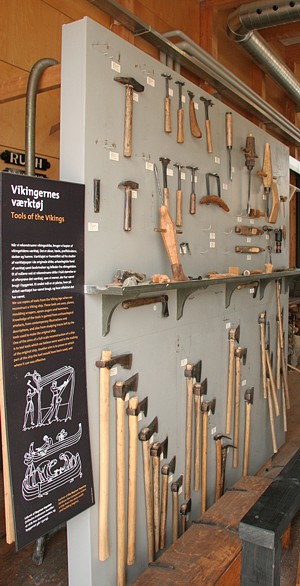 The researchers at the museum study how building tools and techniques (a model boat to the right) have changed during the period when the vikings were active, about 1000 to 1300 AD if I understood correctly. 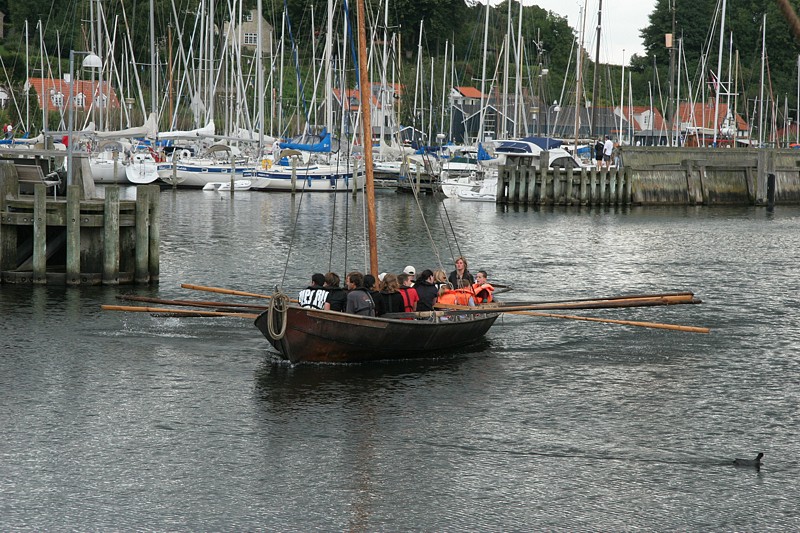 You can even take a real Viking rowing or sailing trip here ! 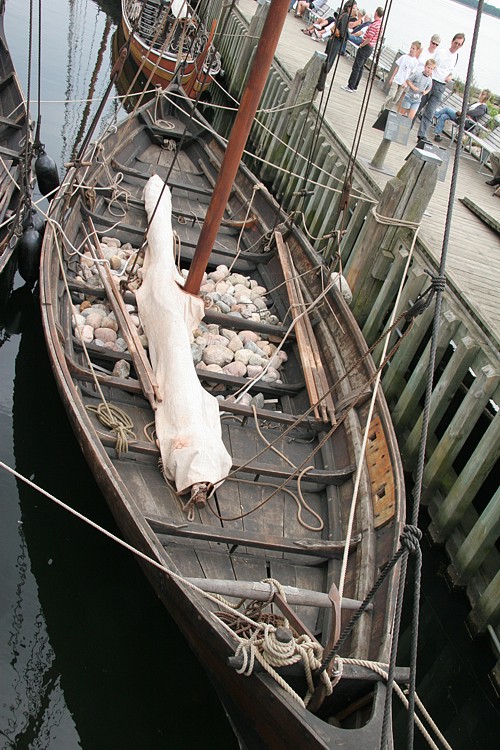 A modern day replica of 'Roar Ege' (which probably inspired the Stollery designed Marblehead Roar Edge) shows the Viking way of ballasting the boat: Throw in a suitable amount of stones in the middle ! 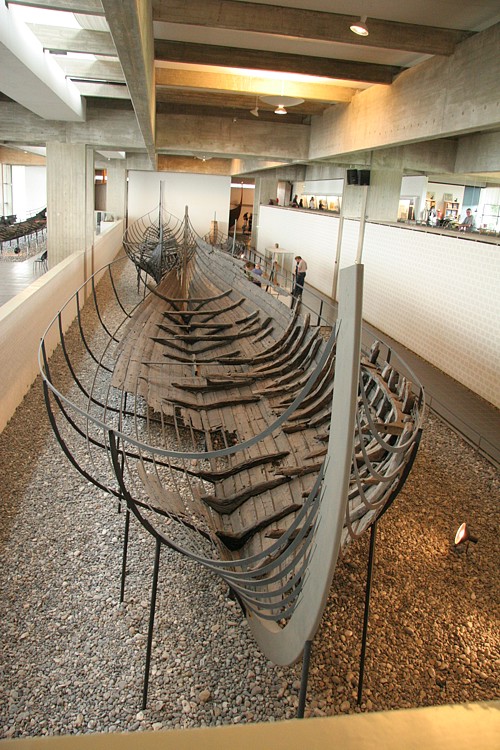 Original wooden parts found below or just to the side of the museum - together with a steel frame which indicates the missing parts and the full size of the ship.