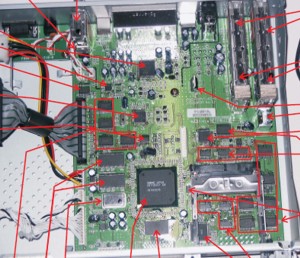 The best thing since sliced bread ! A digital PVR really transforms the way in which you use your TV. If you have digital TV but don't own one of these yet then you are missing out big time !

Boxes with twin tuners for the terrestial network DVB-T were available for some time in Finland but it was only in the spring of 2005 when twin tuner DVB-C boxes became available. The Topfield 5100 was one of the first products on the market - and naturally I had to have it.

The functionality of the topfield can be extended with your own programs and there are large user communities at least in Australia, UK, and Germany.

Here I have taken a look inside the box and tried to describe the hardware. Some of the wilder hackers think it should be possible to run an entirely opensource software(VDR) on the box...