6.5.2013, Pirttibacka. This should have been a familiar map... but made bigger mistakes on three out of twelve legs. (numbers refer to the control-codes on the map)
#30 Aaargh! How is it possible to start towards the first control at 90-degrees to the right direction??
#6 wanted to run along the path and find the less steep opening in the hill (blue-line). Didn't run far enough and instead circled around #19
#14 my route is direct but the second half is slow going through an area with many details. The blue line probably shows a route which is easier and more fool-proof to implement. 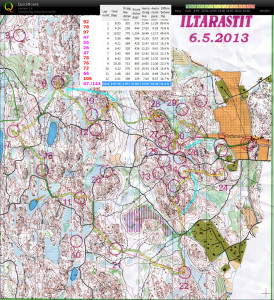