One part of our continuing CNC-mill upgrade is to connect a jog-pendant to the mill which will enable jogging and some other manual controls in EMC2. Here are some pictures and notes of the present status. 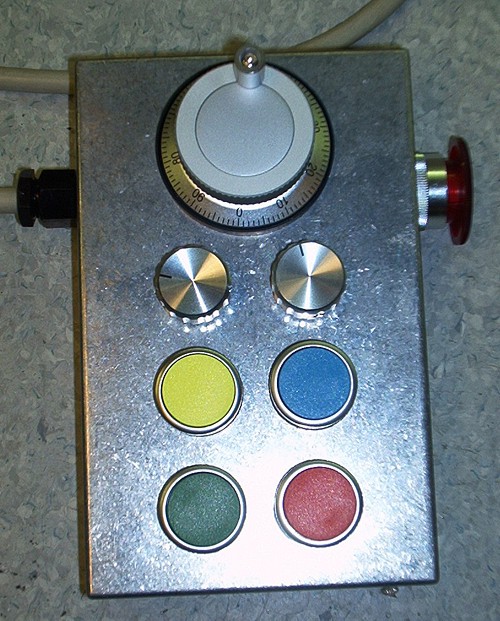 For I/O I'm using a M5i20 PCI card by Mesa Electronics, but most of the jogwheel hardware and HAL code will be the same regardless of I/O method (the parallell port, or another motion control PCI card could be used).

Jogwheel: I got my jogwheel, a 100 ppr Micronor, via ebay. It has 100 pulses per revolution, with a detent at each position, works with 5 V DC, and has differential encoder outputs (+A, -A, +B, -B). To save I/O pins, I first decode the differential signals to single-ended ones using a DS3486.

6-position rotary switch: This switch controls what effect movement of the jogwheel. There are six positions: X-jog, Y-jog, Z-jog, OFF, Feed Override, Spindle RPM Override. To save I/O pins, the position of the 6-pos switch is encoded with an SN74HC148 into a 3-bit value.

E-stop: An E-stop button is included in the jog-pendant, and its electrical circuit is completely separate from the rest of the jogwheel signals. It will be included in an E-stop chain which when broken will cut power to all motor drives. 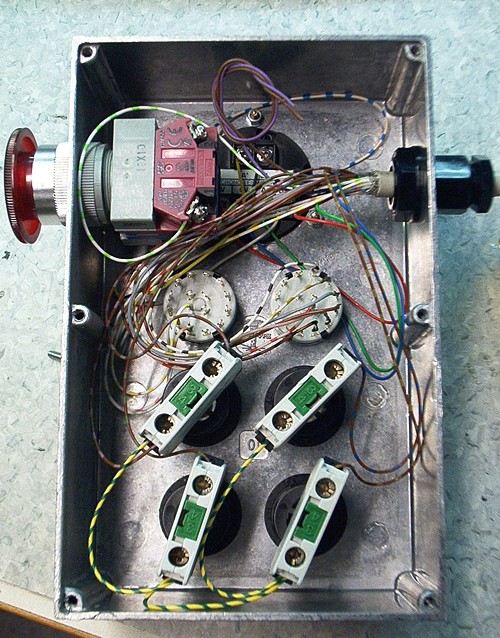 Black backside of jog wheel hidden behind wires and E-stop button at the top. White rotary switches in the middle, with the pushbuttons in the lower part of the box. I used an old 25-wire parallell port cable for wiring.

I've placed all of the HAL related to the jogwheel in a file called jog.hal, which I enable to be run each time EMC is started by adding the following HALFILE command to the list in the [HAL] section of my ini:
HALFILE = jog.hal

If besides jogging the machine you want to control some other stuff, you will also need halui. Enable it by adding the following line to the ini (again in the [HAL] section):
HALUI = halui

All of this is tested with a recent HEAD version (pre-2.1) of EMC2, so it might not work with the current released version (2.0.4).

I understand there is work in progress which aims to create a graphical user interface for HAL where you can drag and drop components to create your connections and logic (something like LabView/Simulink). That work is not ready however, so the only way to really understand the code is to read and hopefully understand the HAL file (downloadable above). However, here's a short description of what the code does:

Then there is code for the jog increment selection: pins axis.0.jog-scale, axis.1.jog-scale, and axis.2.jog-scale are fed with a number (0.1 0.01 or 0.001) which comes from a mux4 component controlled by the increment selector rotary switch bits (inc1 and inc2).

After that we need to select which axis/parameter we are going to jog. This is determined by the three bit pattern from the 6-position rotary switch. My solution is not elegant, but it works: For each function (Xjog, Yjog, Zjog, FO, SO) there's a separate match8 component that will output an enable bit to the appropriate pin (axis.0.jog-enable, axis.1.jog-enable, and axis.2.jog-enable) when the selector bit-pattern is right.

Finally the push-buttons. EMC was created using something called 'NIST-logic' where each property (like flood coolant) has three pins: flood.on, flood.off, flood.is-on), the first two are used for turning on or off coolant, and the third pin indicates the current flood status. So the simplest thing to do in hardware is to match this logic: one button for on, one button for off, and a lamp/LED for indicating on or off. I thought this was a waste of I/O and I don't want lamps/LEDs since I can look at the EMC screen to see that. So my buttons are momentary on pushbuttons, which makes it a bit harder to implement the HAL code...

First it seems simple, use an and block to detect if flood.is-on is true and the button is pressed, then turn flood off.
If flood.is-on is false (flood is off) and the button is pressed, do the opposite, turn flood on.
This simple scheme has however the undesirable effect that if the button is held pressed down for some time, flood will oscillate between on and off. My prelimiary solution is an ugly 1 second delay for the status feedback to the and components. It works as long as the button is not held down for more than 1 second (and you can't switch on/off flood faster than 1 second). Better suggestions are welcome !